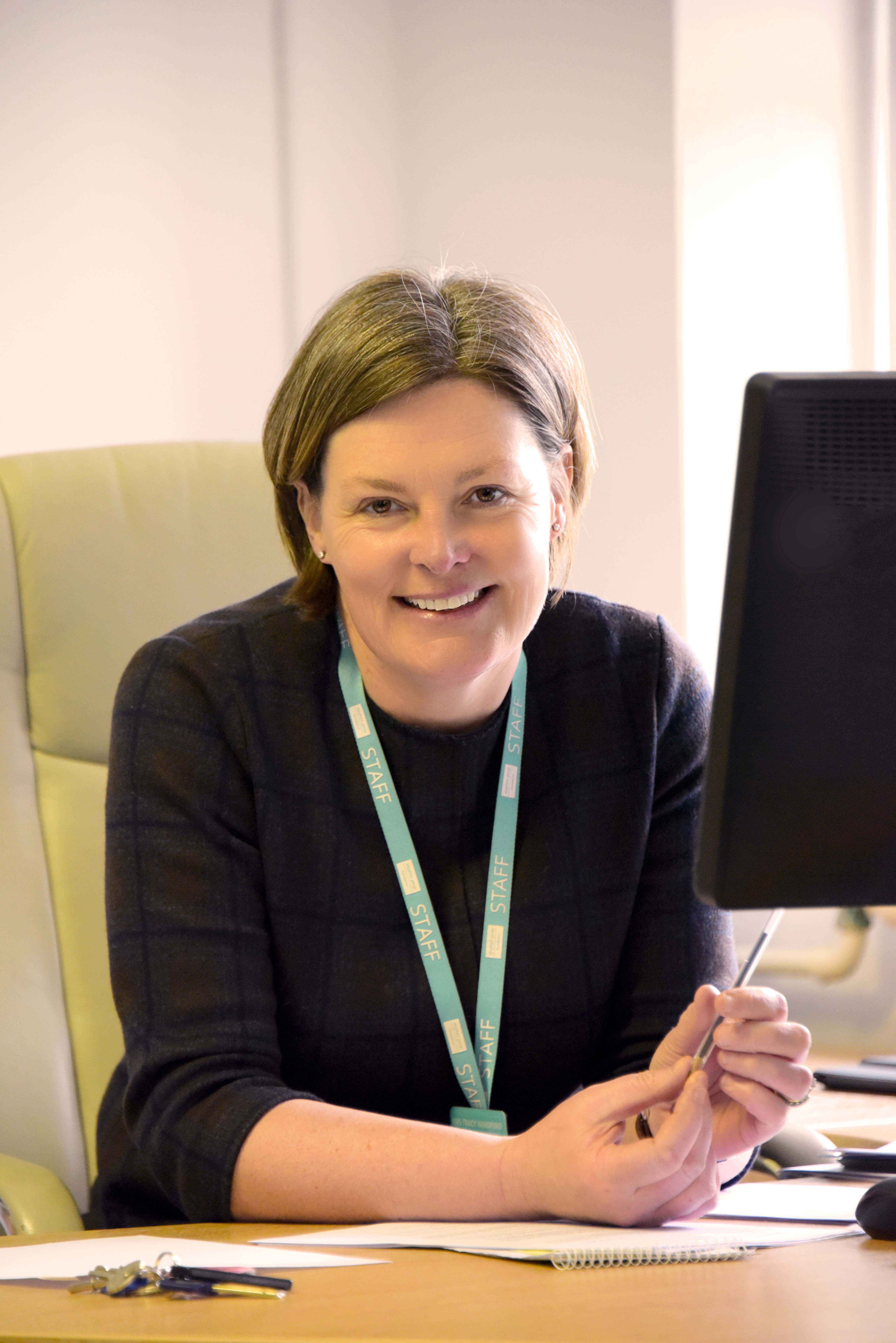 These last three weeks have been exceptional busy at Dame Bradbury’s as you can see from the many and varied news reports including one from half term when 56 children from the Junior School and Dame Bradbury's Years 5 and 6 headed off to Crans Montana, Switzerland for a week of skiing. Their grit and determination was in good supply and they had a fantastic week in the beautiful weather on the slopes. This week there has been a successful Year 6 WW2 collaboration event and the Year 4 Roman Day held at the Junior School as well as a plethora of sporting fixtures. Just before the half term Mrs Knowles accompanied Dame B’s pupils to the first Foundation Chess Tournament and we were delighted to present Nandha with his winning trophy in assembly on Monday. Nandha did admit he was a joint winner (with a sixth former!) 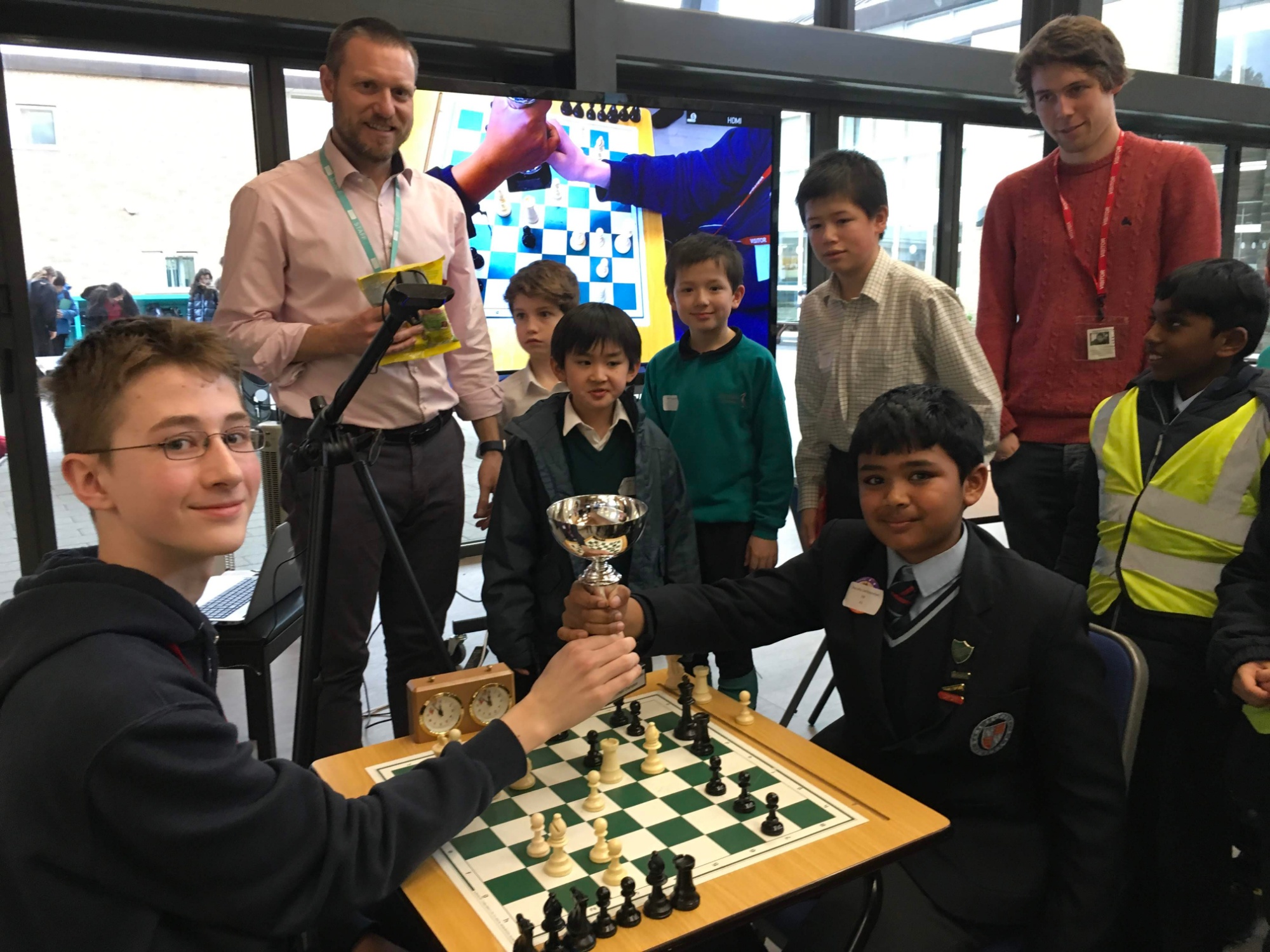 Staring out of the coach window at beautiful white snow covered peaks of a mountain range allows the space for thinking that can be hard to achieve in a day when the school bell dictates the pace and the busyness of a full and enriching day takes over. Last week one of my meandering thoughts brought into focus the limitations of my own ability to communicate outside the UK even though I had flown a mere 75 minutes from home to a region of Switzerland where predominantly Swiss and French families enjoy the beautiful slopes. I was educated when French was taught from Year 7, and if you were fortunate you might also be able to learn German at some point. My German was never really passable but five years of French resulted in my being able to order coffee and ask directions to the train station and write a postcard to a penpal explaining who my family were (I was careful to admit I had only one sister rather than the six siblings I really had as this was simply too hard). For me language learning was a series of tasks around memorising words mostly to get me through a qualification: I don't remember any joy in the learning. The focus was never to be able to converse or effectively communicate, and throughout the week there were many reminders of my lack of skills and, through my own reservedness, my lack of willingness to try.

More than 30 years later and in a world where we are so globally connected and the world has shrunk, it is a dichotomy that news reports this week are referencing a reduction in opportunities for language learning.

This term we have opened up the opportunity to our Year 6 pupils to experience half a term of language learning in both German and Mandarin Chinese in preparation for choices they can make in their senior schools. Our aim is to increase the opportunities for language learning and build on the principles behind language learning being a key part of our curriculum from the Early Years. Our approach is based on learning through stories, rhymes, songs and so on, so that pupils can learn language in context and be able to use what they have learnt.  By linking to thematic learning our pupils are learning that French and Spanish are tools that are used to communicate rather than set subjects only learned or used in the classroom. Languages are very popular in our school, which Mrs Foreman is keen to point out she has never experienced before in any school she’s worked in: pupils traditionally don’t like language learning as there is no context, and the focus is often on accuracy rather than communication. Accuracy can be important later in life (one factor, but not the only one important one, for a high GCSE grade). A good example of the enjoyment of languages is that a pupil who is in Early Years (who don’t learn Spanish) has independently decided that she will join in with Spanish lessons, and just comes and sits down when Mrs Foreman comes into the room! A boy in Kindergarten suddenly started counting last week.  We don't ‘teach’ numbers - we use them in tasks, such as counting how many boys and girls in the group, or checking we have enough resources and through stories or songs. He, and others, pick up the language because it is meaningful to them.

As the end of the half term of Mandarin Chinese comes to a close the response from the Year 6 pupils has been positive: they have enjoyed playing with the language, experimenting with the sounds as well as exploring different cultures. There has been some inhibition, but these pupils have been playing with language for so many years it is testament to their willingness to try, to make mistakes and to want to make sense of this additional language and have fun doing so.

The constant review of our curriculum in meeting our aims of providing one that is right for our pupils and their future needs has me reflecting on the principles of laying foundations for success, and the research from Professor Tina Bruce, renowned expert on early childhood and play, which shows that the long-term benefits of learning another language go beyond being able to communicate with others. Learning languages develops listening, observation, problem-solving and critical thinking skills. These are transferable skills that are of lifelong benefit, both personally and professionally. Encouraging in children a love of language at an early age prepares them well for school and for life.

Following three years as Head of Senior School,  Mr David Walker will be leaving the Foundation at the end of this academic year. Mr Walker, as Head of School and part of a wider leadership team, has successfully overseen the integration of boys into the Senior School. He will now continue his pastoral career as Deputy Head Pastoral and Wellbeing with responsibility for boarding at Wellington College where he and his young family will return to a boarding school life. We wish Mr Walker and his family every success and happiness in the future.

As Brexit saturates the media, Principal Tricia Kelleher celebrates the power of language learning and musical opportunity to do good, both within our schools and in the world beyond. Read it here.

As increasingly curious, creative and independent learners, our Early Years and Key Stage 1 pupils certainly enjoyed venturing ‘Into the Unknown’ last half term, exploring lots of new experiences such as using different painting styles and techniques and making and tasting different foods - pizza, vegetable soup, soda bread in Kindergarten and the most delicious banana and blueberry muffins in Reception. Some parents have ventured into the unknown too by coming into school to prepare food, play musical instruments and to tell stories in home languages - German, Spanish, Mandarin, Swedish and French. 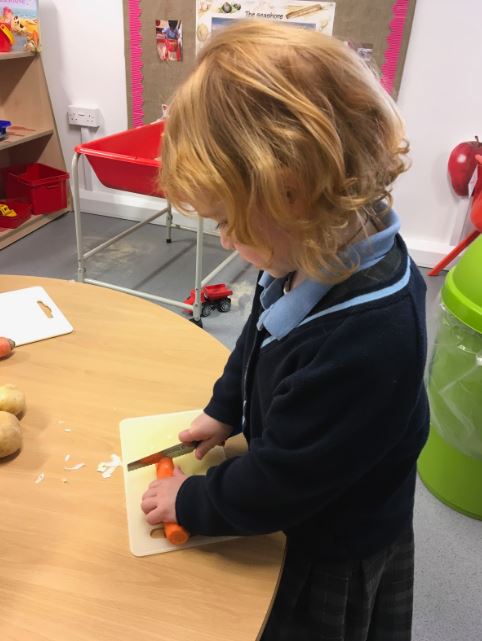 Reception visited City Pre-Prep for the first time, to find out more about Chinese New Year celebrations. Collaboration activities included using yoga to retell the story of the Chinese zodiac and playing number games with Mandarin Chinese numerals.  As part of a global community, it is so important that our pupils recognise we all share similar values even though we may come from different backgrounds, speak different languages and take part in different customs. 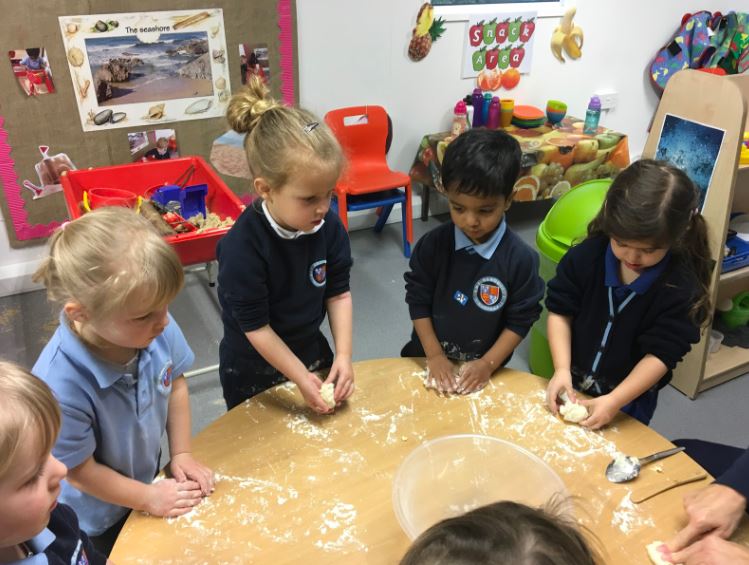 At Forest School, new skills are being developed, such as making tree swings and tightropes, using tools, climbing trees and learning to tie knots. Reception pupils have discovered animal tracks, rabbit warrens and badger setts whilst tuning into various bird calls that can be heard. Kindergarten pupils have made rain catchers using ropes and mini buckets, and tunnels using a tarp; and all have enjoyed cooking popcorn over a fire. Many of these experiences are recreated during independent child-led play and our pupils are showing incredible resistance in all weathers. As we regularly remind ourselves, there is no such thing as bad weather just inappropriate clothing! 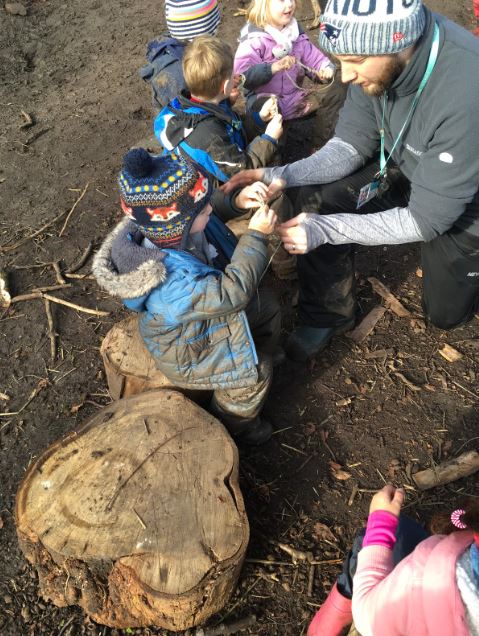 The final few weeks of the half term was an action packed one with regards to sports fixtures and once again, a variety of sports involving a large number of children have taken place.

The Local Schools Hockey league allows our students to experience playing in mixed teams which is something of a rarity nowadays. Our A and B teams continue to show their good form with recent wins against Clavering and the B team winning in a tightly contested match against St Thomas More. 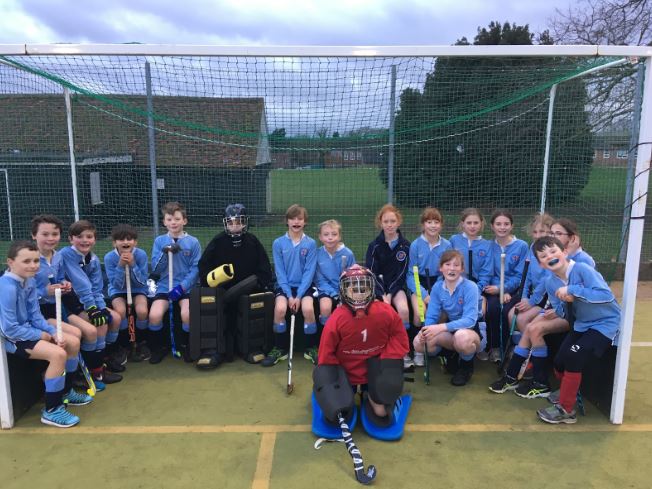 On Tuesday 12 February the U9 netball team visited St Mary's for a fixture. The game was closely contested with Dame B's playing some great netball and coming away with a well earned 3-1 victory. 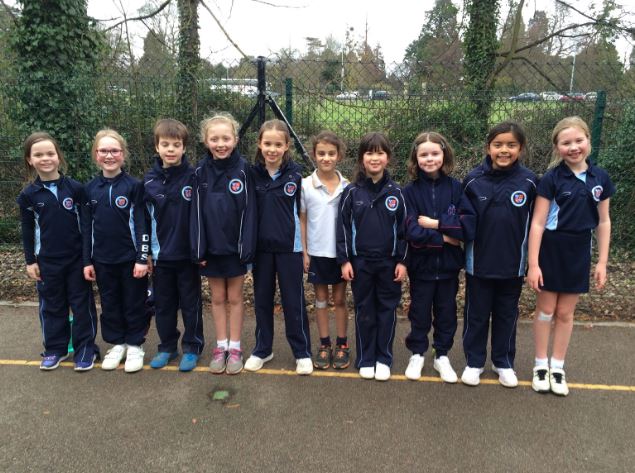 On Wednesday 13 February the U10A and B and U11A and B netball teams made the trip to play King's Ely. In fantastic weather conditions Dame B's U11A team delivered the performance of the day winning 15-2. The U10A match was very close and ended in a thrilling 7-7 draw. The U11B team were leading going into the final quarter but some sharp shooting from King's Ely saw them turn the game around with Dame B's losing narrowly 6-4. The U10B team worked hard against strong opponents and unfortunately lost 10-1 but the team demonstrated great spirit throughout the game. This week the U11A and B teams recorded excellent victories against St John’s School. The U11A won 20-6 and the B team won 17-11. 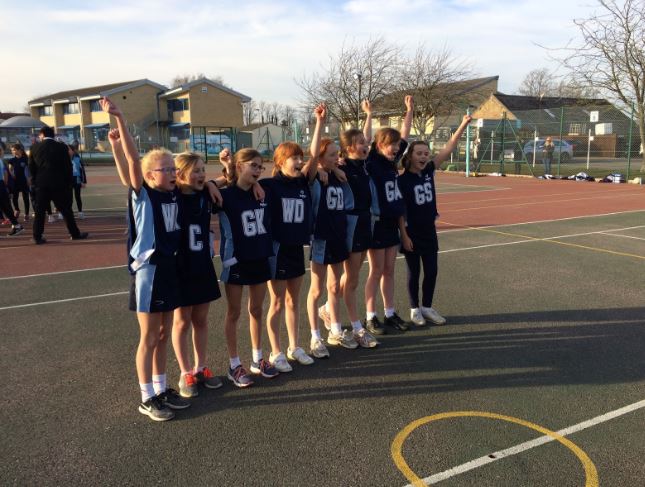 The U9 football teams took to the field against Katherine Semar which saw our A team battle out a hard fought, 2-1 victory. The B team learned a lot from their game and whilst the result did not go our way, the boys had fun playing which is what it is all about.

Before half term, the U11 boys hockey teams took part in the first ‘all boys’ hockey matches for a number of years against boys from SPF Junior School and both teams performed well. In two evenly contested games, SPF ran out 3-0 and 1-0 victors in both matches. There was encouraging play from both teams in their first competitive fixture which was great to see. 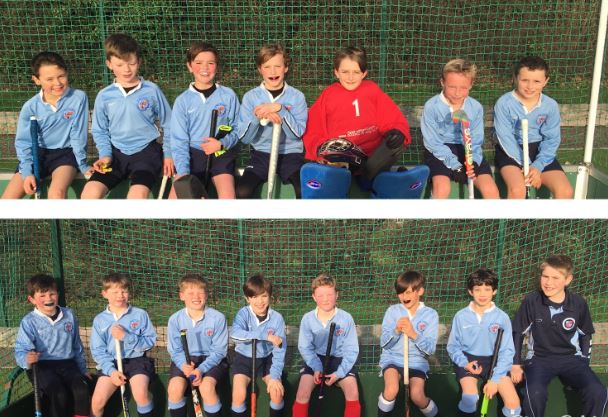 The half term came to a close with our U11 boys football teams making the short trip to Katherine Semar. In what were two excellent games, both matches ended in draws with some excellent football being played by both schools. 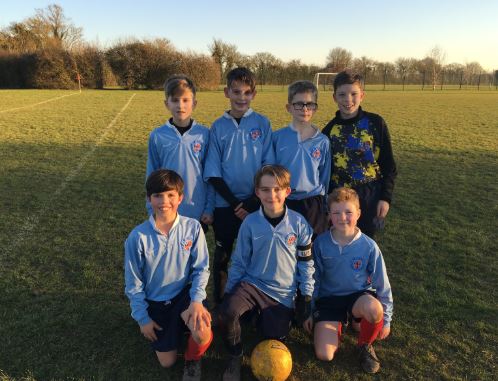 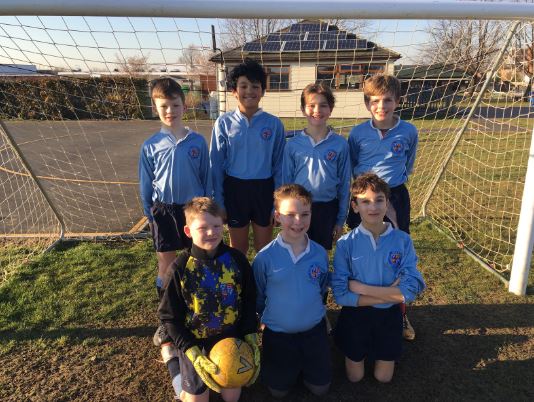 The U11 Mixed Hockey team competed in the Sports Partnership Hockey tournament at Joyce Frankland with the aim of qualifying for the County Finals next week. With 3 good wins, the team have qualified for the finals where they will now take on the winning sides from the other districts around the county. 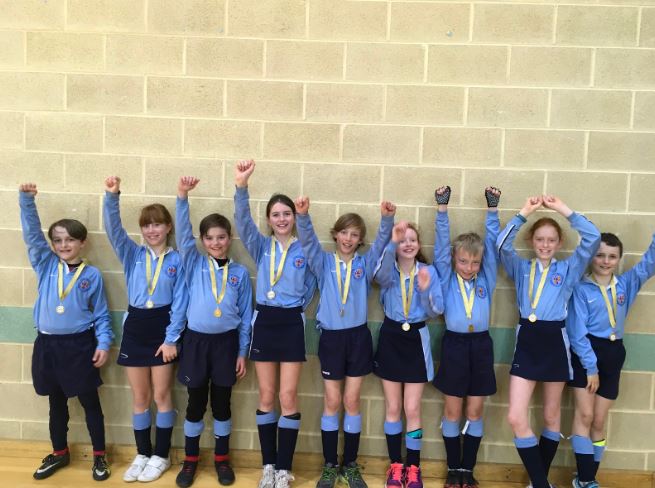 As always do keep up to date with all the latest news, events and goings on in the PE department by following us on Twitter @DBS_Sport.

A note from Mr Evans:

I would like to thank every single person (pupils, parents and staff)  who has kindly donated towards my Marathon run which is fast approaching. I have been overwhelmed by the support, donations and kind messages I have received. Over £700 has been donated which has left me amazed by everyone’s generosity. The T- shirt is now with the printers so I am looking forward to seeing the final product once all complete. As I mentioned to the children in my recent assembly, training has been somewhat hindered due to a slight injury but I know by having the children’s names on my T-shirt, this will prove to be massive motivation on the day when the going gets tough! Many thanks once again to all who have donated.

With the PTA Family Fun Run taking place on Sunday 19 May, please do keep an eye open for the information coming out soon detailing the event. It would be fantastic to have as many families and friends involved on what should be a fantastic day.