Pupils from Year 6 at the Stephen Perse Junior School and Dame Bradbury's enjoyed a collaboration day learning about the experiences of evacuees during World War Two.

On Tuesday 26 February, Year 6 pupils from the Stephen Perse Junior School were evacuated to Saffron Walden where they met up with their Year 6 friends and allies at Dame Bradbury’s. After a brief introduction, the whole year group listened attentively to Neville Chamberlain’s declaration of war, which set the tone of their exciting and realistic WW2 Collaboration Day.

Next, it was time to play Pictionary which helped Year 6 get even more familiar with WW2. The race was on to complete the list of 30 relevant words, objects and key figures: drawing skills and nonverbal cues were tested to the limits. 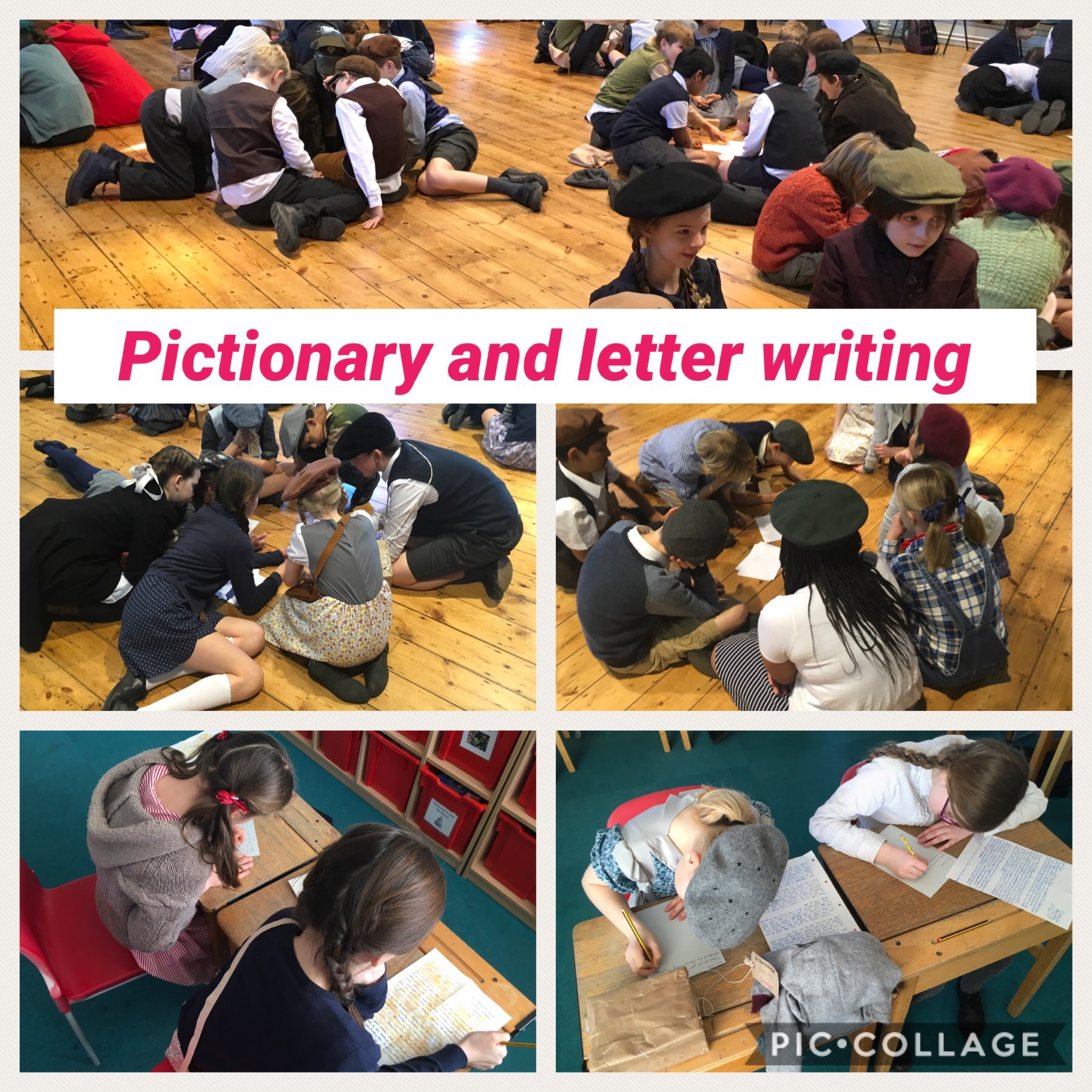 After an energetic playtime in the beautiful sunny countryside, Year 6 were split into four groups to experience different war time activities. Drama, letter exchanging and a fun ‘make, do and mend’ toy-making activity were all on the schedule.

Before the Evacuation Day, each Junior School pupil wrote a letter to a member of Dame B’s and vice versa. These letters gave them all the opportunity to really put themselves in the shoes of an evacuee child and to describe what it must have been like to arrive in a new place and join a new family - thoughts, feelings and facts were considered. During the letter exchanging session, the children reflected on what it must have actually been like to be an evacuee and to live during the war. Being empathetic and able to take on the role of an evacuee child was important, in order to recreate history and step back in time.

'My pen pal was obviously trying to be strong even though she felt emotional about what was happening.' Aoife 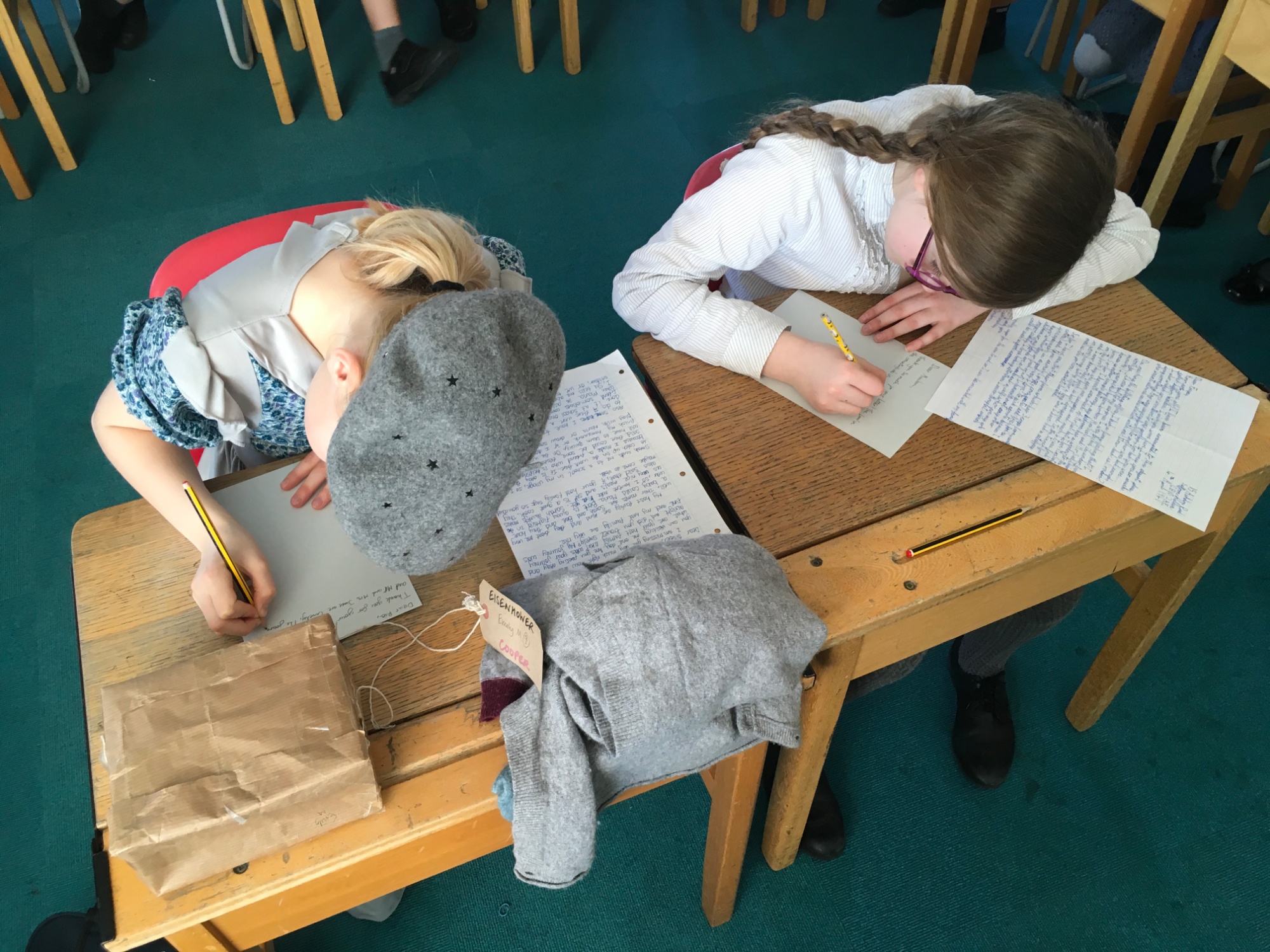 As Year 6 continued in their role as wartime children, they took part in a Drama session in which they spent time thinking in more depth about what evacuation would have been like. They started by considering what evacuees would have put into their suitcases in preparation for leaving their homes. Year 6 listened to some news reports of children at Waterloo Station and created a tableaux showing what they thought it might be like at a station ready to board a train. Everyone freely shared their thoughts and feelings which helped them to understand what it was like for children and parents during this life changing experience.

'We had so much fun because we got to listen to speeches of children who were evacuated and it helped us understand a bit more about life as a child in WW2.' Ashani, Emily, Eleanor

Lunchtime was a hive of excitement and, after receiving their ration ticket and queuing in an orderly fashion for their lunches, everyone tucked into delicious fish and chips wrapped up in newspaper. The Theatre was buzzing with family discussions and laughter; there was a great sense of happiness, warmth and delight, and a delicious cookie treat ended lunch on a sweet note!

I loved eating fish and chips out of newspaper with my fingers because I would never be allowed to do that at home! Emily 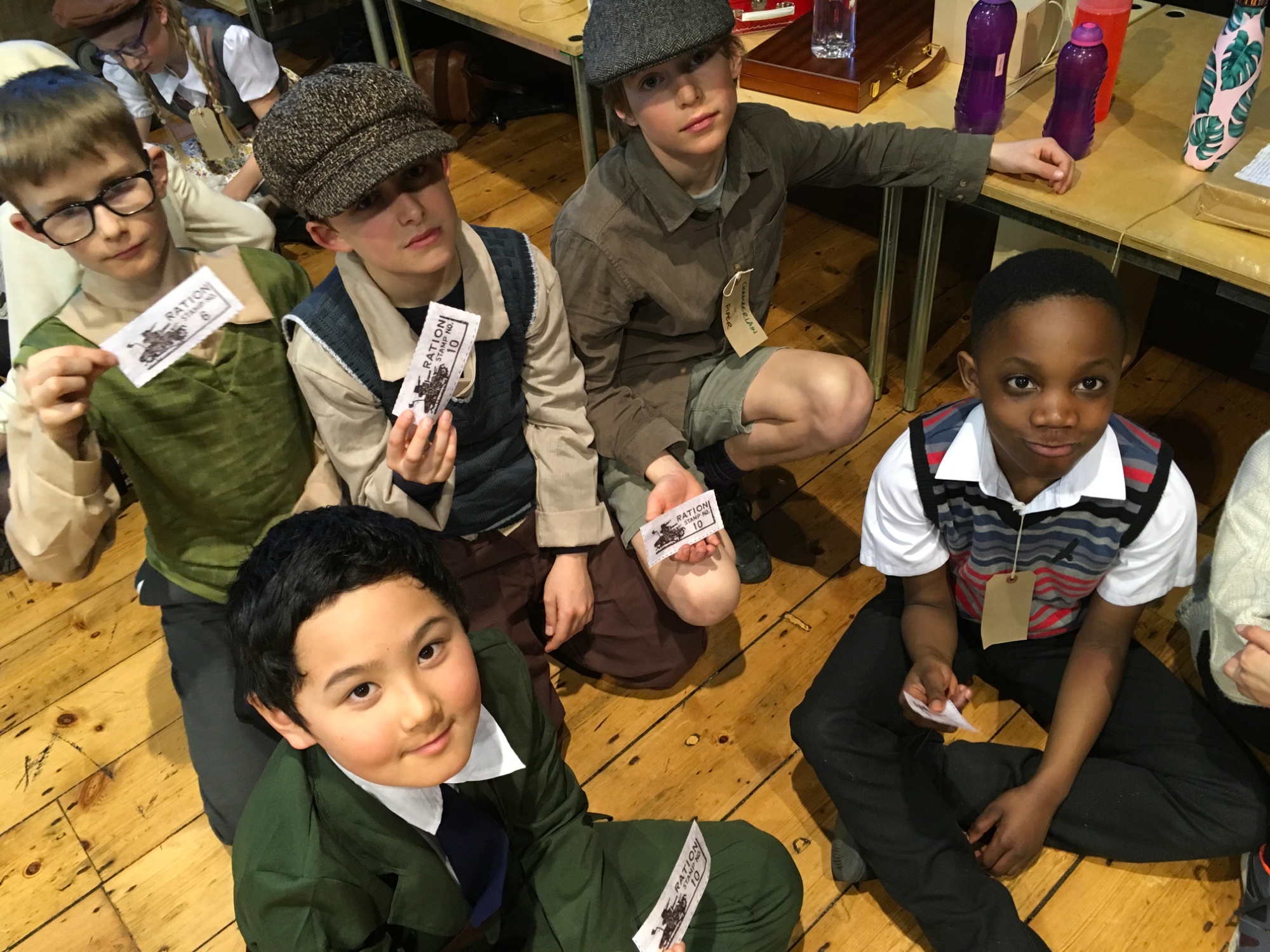 No WW2 experience is complete without an air raid. Experiencing one was thrilling and the sense of urgency and safety was evident as everyone piled into the ‘shelter’ waiting for the ‘all clear’.

I enjoyed finding out what it might feel like to be in an air raid, but it wasn’t a nice experience. Asher

Recreating spinning bombers during the toy making session gave Year 6 an opportunity to debug and collaborate on ideas on the engineering and functioning of these hand made toys but also to consider that, during the war, children would have limited toys and resources so therefore made their own. 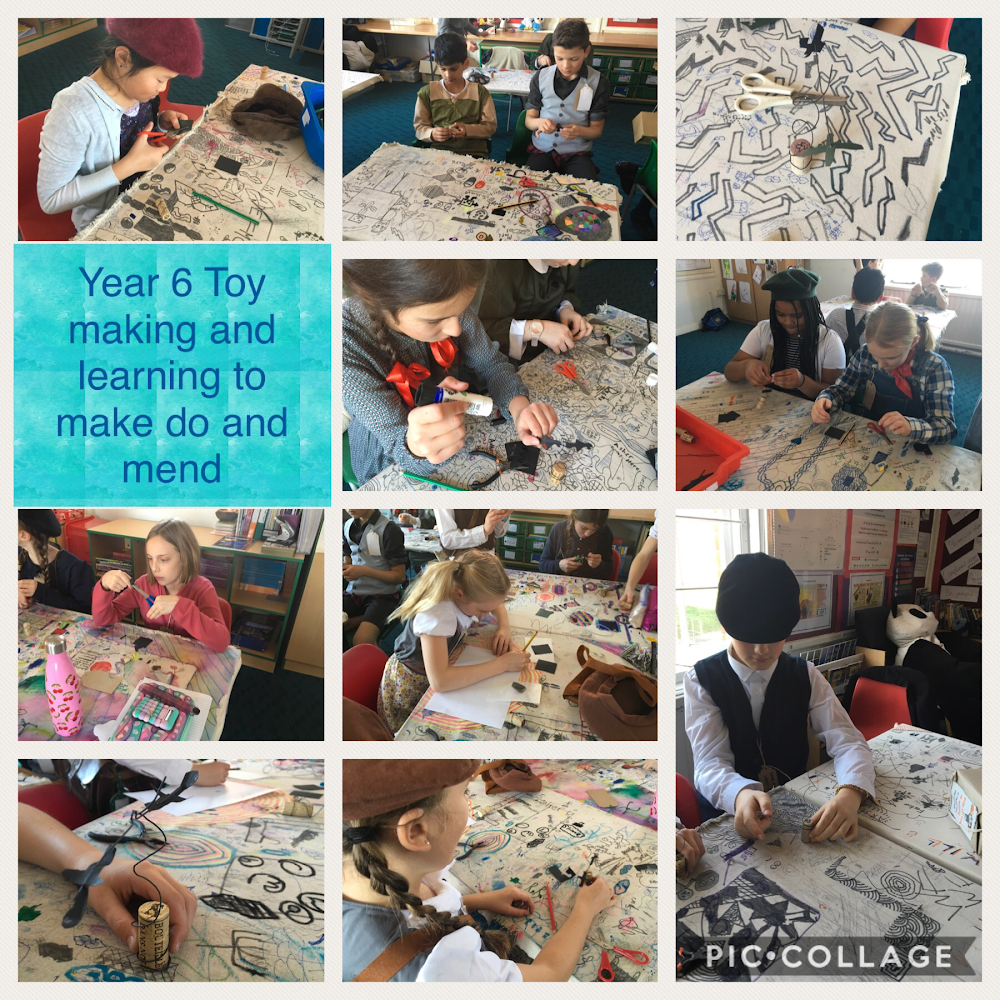 Year 6 spent time exploring different resources and their properties in order to engineer a spring type moving toy. They used pliers to bend and adapt the different angles of the wire in order to create a perfect flow from the top to the bottom. Fixing two small paper planes to an additional horizontal wire added an extra challenge for Year 6 to critically think how they could ensure it balanced and provided momentum in order to make the beam-like wire swirl around the elevated spring.

They had lots of fun trialling and testing different theories and adapting their products at each step. Everyone was mesmerised by the twirling effect of their planes.

'I liked making the toys as it taught me to persevere until it worked. It was fun to make a toy from unusual materials.' Mouboni

'I loved making the spinning bomber. It was great to make something that works and taught me not to give up.' Analena 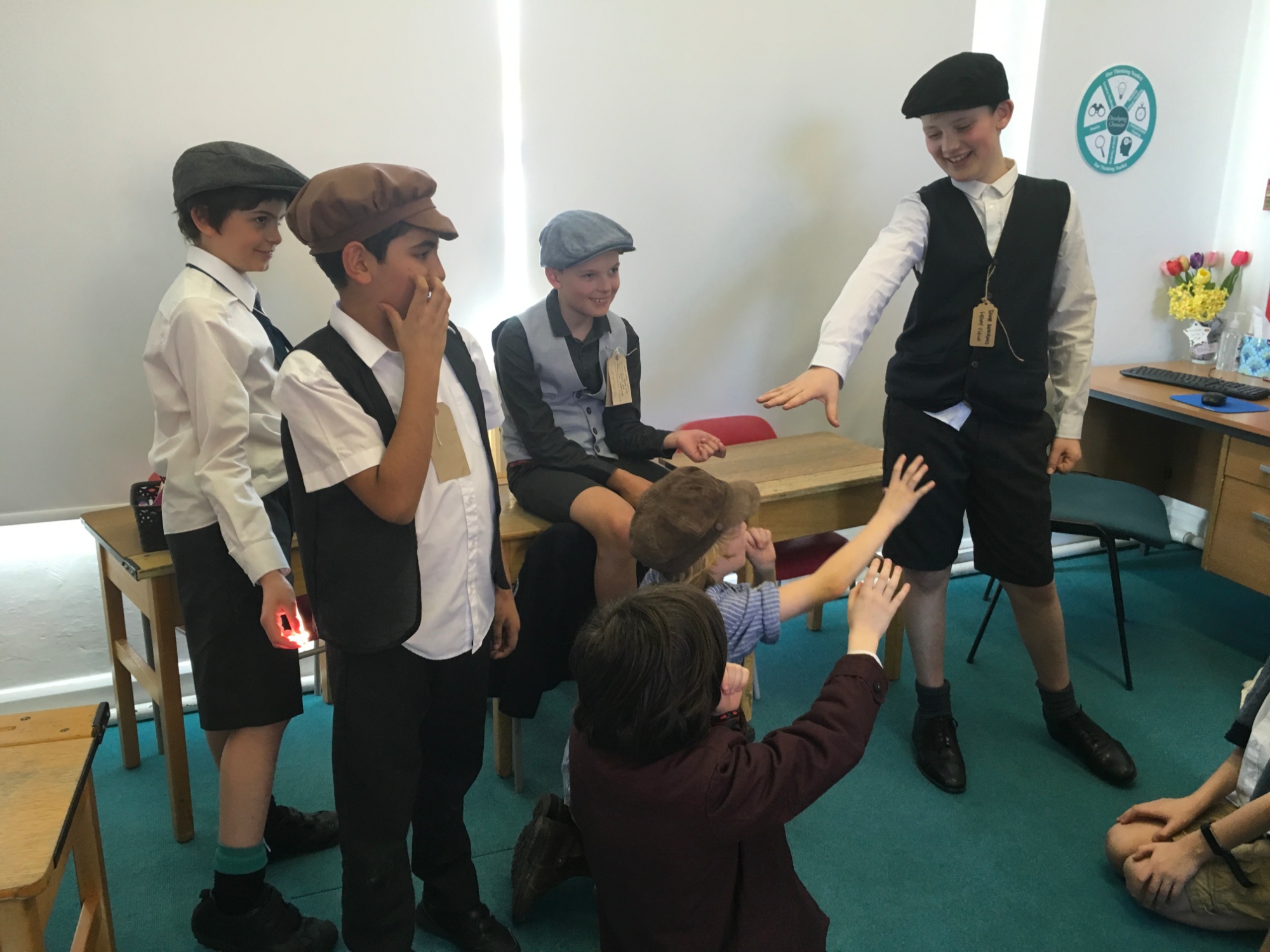 Before saying their farewells, everyone gathered for a final sharing of songs and good cheer to end their wonderful day together. Then it was time for Year 6 to head back to their respective 2019 classrooms, ready to embrace the present day again.

'I learnt that shelters were called Anderson shelters. I enjoyed the toy making activities because it was challenging to make it work and I wanted to keep doing it so the glider spun properly.' Jay

'The air raid was so cramped and smelly. It wasn’t a nice experience and it wouldn’t have been nice to live like that.' Harry

I loved absolutely everything! Bertie 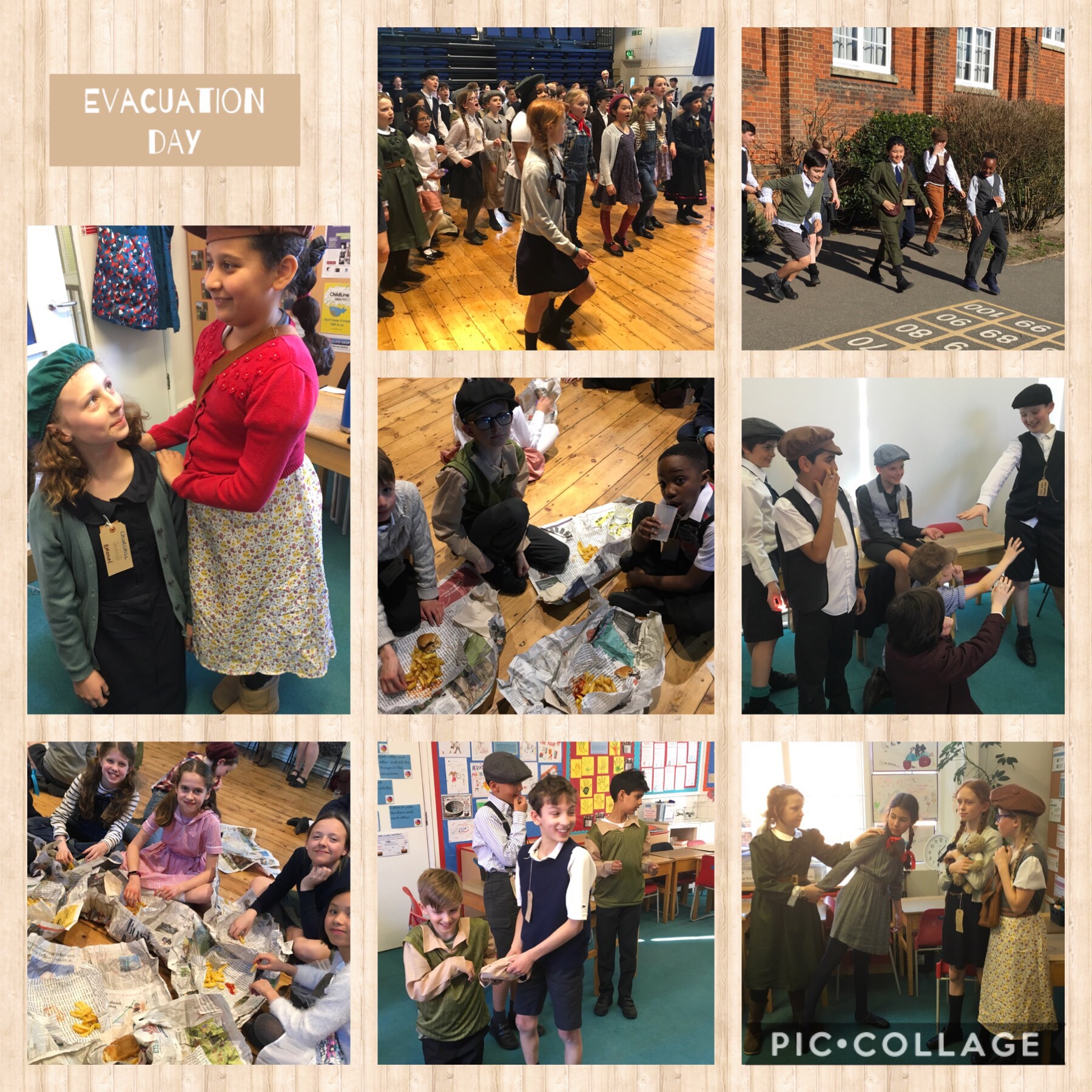