The Festival of Learning - The Problem with Plastics 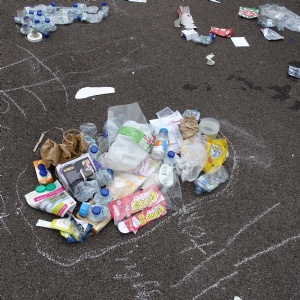 Products, such as plastic, that aren’t decomposable have harmful effects on the environment. According to Craig Leeson, “Plastic is wonderful because it’s durable and terrible because it’s durable.”, and as a result of this, plastic that has ended up in the ocean is “coating our land and ocean like a disease”. It’s estimated that by 2050 there will be more plastic than fish in the ocean, and it’s of utmost importance to reduce the amount of plastic consumed. During the Festival of Learning, Year 7 and Year 5 students focused on this aspect of environmental awareness and sustainability by doing the following activity.

The year groups worked together to make boxes demonstrating how plastics aren’t decomposable, that will go on display in the N Block, with the idea being that people will be able to see that even after a large amount of time, materials aren’t degrading quickly (if at all). Initially, students made hypotheses of what they believed would and would not degrade best, which gave a primary insight into being aware of the enormity of products that aren’t decomposable. To show the impact of plastics on the environment, students watched a video, where marine biologist Dr Jennifer Lavers explained how damaging the ingestion of plastics is to birds. The video included her examining the amount of plastic birds had ingested, with a record number being inside a bird being 276 pieces of plastic. This equated to 15% of the bird’s body mass, which, Dr Lavers explained to be the same as roughly 12 pizzas in a human stomach.

Regarding the educational benefits of the activity, Year 7 student Ana Hickling stated that she believed it would be “helpful” for the Year 5 students to already begin learning at a young age about the harmful effects of plastic on the environment. As a result of the overall task, the younger generation will have gained a further understanding of how they should not buy single-use plastic and make an effort to be more environmentally friendly in day-to-day life. This helps spread the concept that despite it possibly feeling like one person cannot change much, if everyone in a community takes small steps by using a travel cup or a reusable water bottle, people can collectively work to save the planet. The activity helped students understand the actions they can take based upon the further awareness they have gained during the Festival of Learning.