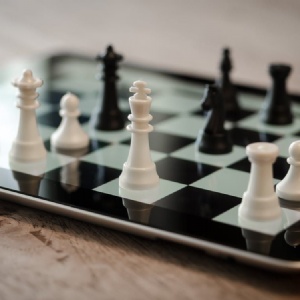 The study of logical decision making.

This topic focus article was written by 6th Form students Phillip and Rhys.

On Wednesday the 6th of December, Dr. Manuela Dal Borgo gave a talk outlining the concept of ‘game theory’, the thing that connects these wide-ranging topics.

Brazilian born Dal Borgo has an impressive academic history. Her higher education began at the Brazilian university conducting an MA in classics, progressing to an MSc in Economics and a PhD in Classics and Economics, with a thesis of relating to the application of game theory, at UCL. she is currently in her post doctorate in Classics and Economics at Cambridge University, focusing on game theory’s application to strategic wartime decision making in archaic and classical Greece.

With such credential who is better to explore a topic as broad and complex as game theory?

This begs the question, what is game theory?

Game theory is the study of logical decision making based on the theoretical outcomes of various possibilities so that one party may be as successful as possible. Dr. Dal Borgo introduced the idea with several examples, including what is known as the prisoner’s dilemma: Two thieves are caught red handed and the police come up with a way to make the accused tend towards a confession. They interrogate the thieves separately and explain to each thief the possible outcomes:

Each prisoner will tend towards the outcome which results in them receiving the smallest penalty without knowing what the other does.

The same is true for prisoner 1.

If we model this in a matrix we can see that the tendencies intersect. We learnt that the intersection of the options is what the two parties tend towards, known as the Nash equilibrium:

We applied logic of this sort to a variety of other situations and observed how outcomes were determined by logical decision makers. With each time an equilibrium being reached, normally only occupying one portion of the matrix. But should we always make decisions based on the idea of game theory? How can we apply game theory in our day to day lives?

These are questions which can be answered by each person in their own way.