Festival of Learning - The Dangers of Dirty Water 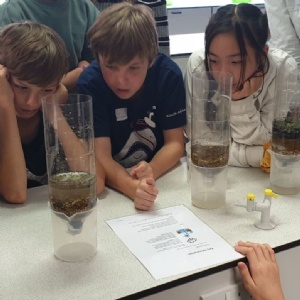 Year 7 students take on the role of countries and design a water purification system.

Dirty water is a problem that on the surface, most people assume is dangerous for health. With diseases such as cholera and typhoid being the main cause of infant mortality, this assumption is largely correct. However, water pollution is also dangerous for the economy as treating and preventing the contamination of water is expensive. Additionally, contaminated water has detrimental effects on the environment. Industrial waste that contains toxic compounds gathers in bodies of water, which damages the health of animals. This in turn, is damaging to whoever eats the animals, and the waste in water disrupts the structure of life in aquatic environments. Therefore, it is evident that cleaner water is a necessity that is needed for the animals who live in the water, and the humans who consume it. With this in mind, the Year 7 pupils participated in an activity that highlighted the importance of this.

After being given the aim of designing a water filter, Year 7 students split into groups and were assigned countries. Each ‘country’ was given the task of creating and building a system of filtering and purifying dirty water. To reflect the realities and economic issues in the world, the countries had different amounts of credits (that were used as money) and different natural resources they could use for the design of their water filters. The students acting as Qatar were quick to discover during the exercise that they had more credits than the group who were India, but they also realised that they only had access to sea water, which needed to be purified further. The students acting as India had the least amount of credits which inhibited them from buying certain products, but lots of access to water due to India’s frequent rainfall, which could be effectively used in their design, and didn’t need to be purified.

The Year 7s managed to successfully filter their water and make it cleaner than it had been previously. This enabled students to gain awareness of the pre-existing differences between countries in reality, and how these differences could be utilised throughout the activity. In terms of raising environmental awareness the project was advantageous, but it also encouraged students to work together, communicate, and gain a global perspective and understanding of different issues faced by people in various parts of the world. These newly gained values are considered to be significant as it will help students act on what they have discovered during the Festival of Learning and live in a more sustainable way.