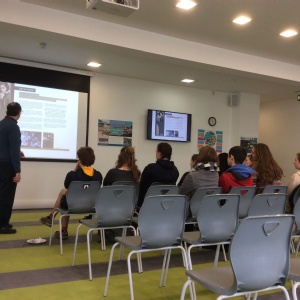 The role of the Stephen Perse Foundation during World War 2 was explored during an interesting talk for the History Society this week.

Students heard about the city's efforts during WW2 to take in refugee children, including the efforts of Mary Cattley, headmistress of the Perse School for Girls in the 1930s and throughout the wartime period.

Mike said: "Perse Girls was very supportive of refugees coming from Germany in the 1930s. They offered refugee children places at the school without fees or with very low fees to enable the children to come here. Miss Cattley would go out and ask the refugee children to see if there were any suitable girls to offer a place to."

Mike told the society about Erika and Doris Rath, German Jewish girls who came to Cambridge fleeing Nazi Europe. Miss Cattley offered both girls a place at the school, and also wrote to the Cambridge Children's Refugee Committee to say that Doris had got a good report and should return to take the school certificate.

More than 100 children came to Cambridge city as part of Kindertransport, an initiative to allow unaccompanied under 18s into the country 'as long as they were not a burden to the state'. The refugee committee in the city were so successful that they were given responsibility of the whole region, placing about 2,000 children.

The Stephen Perse Foundation has also created a short iBook about Kindertransport at the school, by Aisling Brown, detailing the school's involvements.

In November 1934, notes from the Governor's minutes said "leave was granted... for children of Dr Fränkel, a refugee from Germany, to come into the school to listen to lessons... without fee". A number of children continued to join the school. Even after some were sent to the internment camp in the Isle of Man, the girls were released and allowed to take the school certificate. One passed with a distinction in every subject and another obtained several credits.

Miss Cattley retired from the Perse School for Girls in 1947.