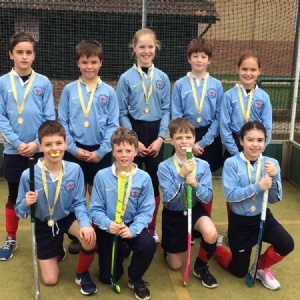 The Dame Bradbury's U11 hockey team took part in the USSP Hockey tournament held at Joyce Frankland on Wednesday and came away as champions. Having been placed in a group with Newport, The Rodings, Debden and Felsted Primary, the team played some good hockey to win all four group matches without conceding a goal.

The next match was a semi final against Takeley who finished runners up in their group. A solid 3-0 victory ensured qualification for the final match of the day against St Thomas More. In a game where we had the lions share of possession, a 3-0 victory ensured we came away as champions. The team have now qualified for the County finals being held at Felsted Prep on Wednesday 8 March. Well done to everyone who was involved.