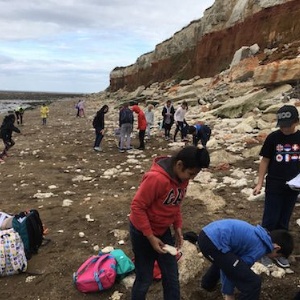 Before setting out for Norfolk on 20 September, the Year 6 pupils had an impromptu discussion about erosion, transportation, longshore drift and deposition. This was an ideal opportunity for them to reflect on the research they undertook, as a homework assignment, at the beginning of their thematic unit of study on coastlines.

When they arrived at Brancaster they were able to see, in situ, the sea defences they had been learning about at school. This beach is the perfect location for sea defence field work, as it exhibits four different examples of hard engineering: gabions, groynes, rock armour and a sea wall. It also shows the importance of soft engineering like dune regeneration through zigzag fencing, marram grass and fencing off.

With their heads brimming with facts about coastal processes, the children took part in a debate about whether or not the sea defences should be maintained. Each group worked hard to construct their points and put forward their arguments, thus developing their debating skills. They assumed the role of key stakeholders in the region: a member of the golf club, an RSPB member, a local farmer, a local resident and a representative from the Environment Agency.

The debates were lively, heartfelt and effective, with each group deciding that the government should continue to maintain the coastal defences. Respect was foremost in the minds of these future leaders reflecting on environmental issues that could affect generations to come.

We enjoyed learning about sea defences on the beautiful Brancaster beach, where the sand stretched for miles out to the sea."

At Hunstanton we were greeted by the dramatic vista of the multi-coloured cliffs, which provided an excellent opportunity to see the effects of both erosion and deposition. The sea has eaten away at the rocks here, giving a rare insight into the geology beneath our feet in East Anglia. The sediments were deposited over several million years during the Cretaceous Period, ranging in age from 99 to 108 million years ago.

The children learned about how to use some of the essential tools carried by geologists, including the hammer and hand-lens, in order to examine rocks in greater detail. They were then given a chance to explore the beach where they could have a closer look at the kinds of eroded rocks and other fascinating debris scattered around. This was an enjoyable way to put into practice some of the scientific skills which Year 6 pupils have been learning about so far this term, including careful observation and teamwork.

Year 6 had an amazing time at Hunstanton beach, where we looked at the damage done to the cliffs as they wear away due to erosion. We also searched for fossils and rocks."

It was good to take a break in the day. Everyone had a smile on their face, chatting and giggling with a delicious ice cream."