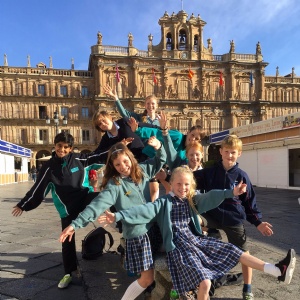 Bright and early on the Thursday before half-term, 43 Stephen Perse Foundation pupils and six members of staff set out on an exciting adventure to Salamanca in northern Spain. 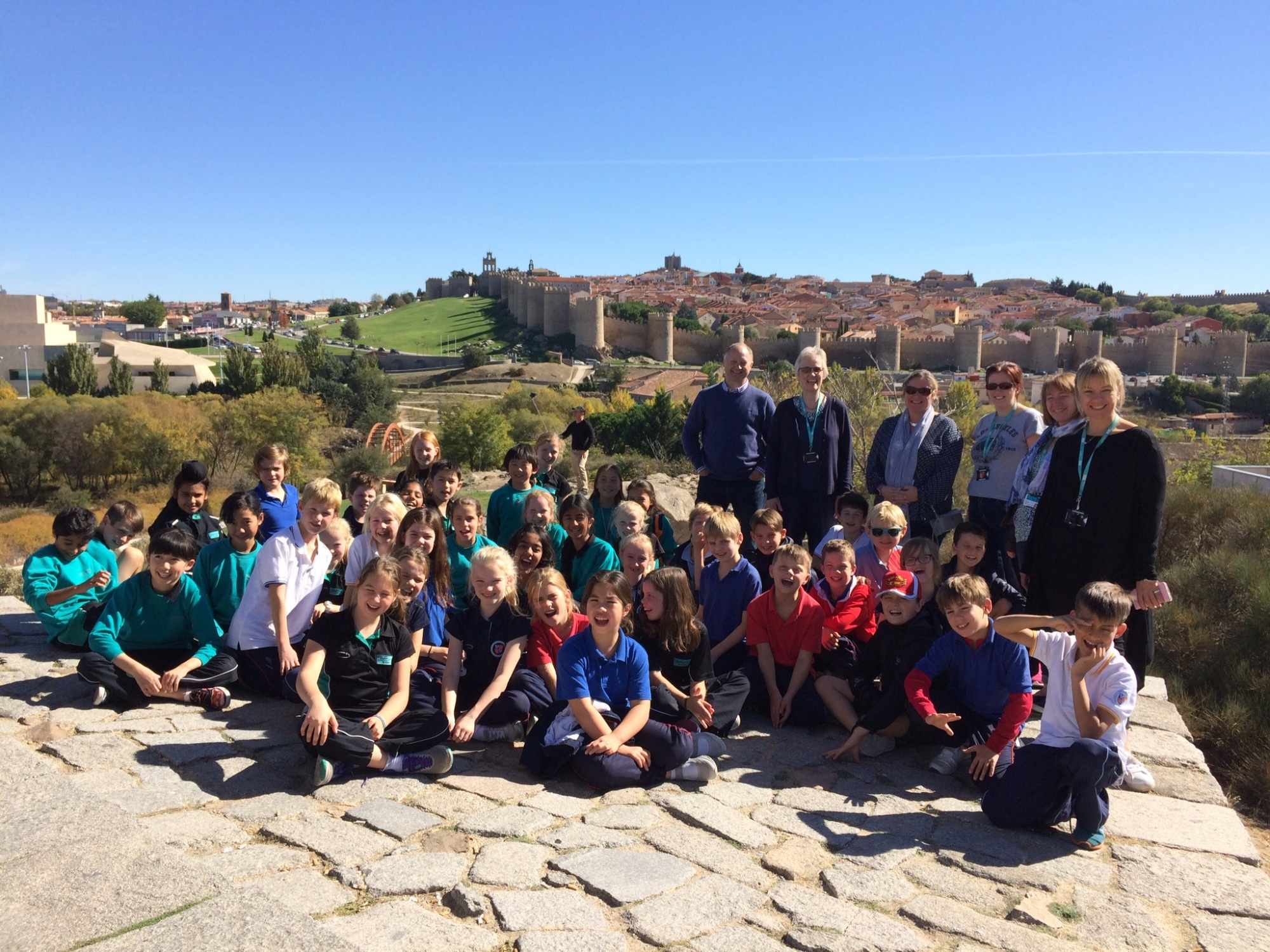 Over the course of the five days away the children had the chance to be young explorers, soaking up the atmosphere of the beautiful historic city, wandering into courtyards and looking up at the ornate buildings of the ancient university, where in the 16th century Christopher Columbus might have been heard giving lectures about his discoveries of the new world.

Our Stephen Perse pupils were on their own journeys of discovery in this city centre, now a UNESCO world heritage site, as they searched for treasure hunt clues in the stonework around the Plaza Major, tried new delicacies on a tapas tour, climbed to the top of the cathedral tower for a view over the town, marvelled at the stained glass windows and the beautiful exhibits in the Casa Lis, were mesmerised by the collection of vintage cars and bicycles in the Museo de Historia de la Automación, and negotiated the souvenir shops. Time will tell which will be the most enduring of the ‘treasures’ that they collected.

As well as all the sight-seeing, the Dame Bradbury’s and Junior School pupils had three full mornings of Spanish lessons at the Colegio Delibes, where they worked on interactive activities in small groups.

Also known as "El colegio donde las paredes hablan" (the school where the walls speak), the school was a very stimulating environment for learning, with each classroom having beautifully painted walls covering different themes ranging from literature to music to the geography of Hispanic countries. The warm, friendly approach by the staff helped the children relax and gain confidence as they joined in vocabulary games, solved puzzles and even worked out grammar rules. It was great to see them then using their new skills to communicate in restaurants and around the town in museums and shops, as well as courteously asking locals for help in solving the clues to a quiz in the historic centre.

Muchas gracias Mrs Foreman - it really was an amazing trip.

In their own words...

I was about to have my first day at Spanish school. I was worried that I wouldn’t understand what
they were saying but in the end it was fine because they would tell you or act it out. We learnt
questions in Spanish like, ‘How are you?’ The next day instead of being nervous, I was excited. We
learnt so many parts of the body in Spanish it took up a whole page in my book! Abigail

Today we did not have language school but instead we did a Treasure Hunt! It was really fun because
we got to ask members of the public questions in Spanish and my group won! Utthara

Today we went to the Town Square, it was very beautiful, it had loads of Spanish flags around the
Square and when we looked up at the sky we saw lots of birds. Then we walked back and looked at
the shops but the best part of my day was when we saw buildings made out of sandstone. Sam

After lunch we climbed the cathedral, we climbed all the way to the top! It was a bit scary looking
over the edge but it was even more scary walking up the spiral staircases. After the cathedral we
went to the car museum where we saw lots of cars from all different periods of time. Rebecka

We went to the amazing Casa Lis Museum, this was a rich man’s house but is now a museum of art
deco. Blue, yellow and green shone around the entrance through the stained glass. Smera

Now I am on the plane and I can briefly see the summits of mountains, rivers flowing, busy roads dry
grasslands and big cities. Madrid is stunning city with beautiful views. I should like to say a special
thanks to all the teachers for coming, especially Mrs Foreman who made this trip happen, we are
very grateful and lucky to go on this trip. Abigael 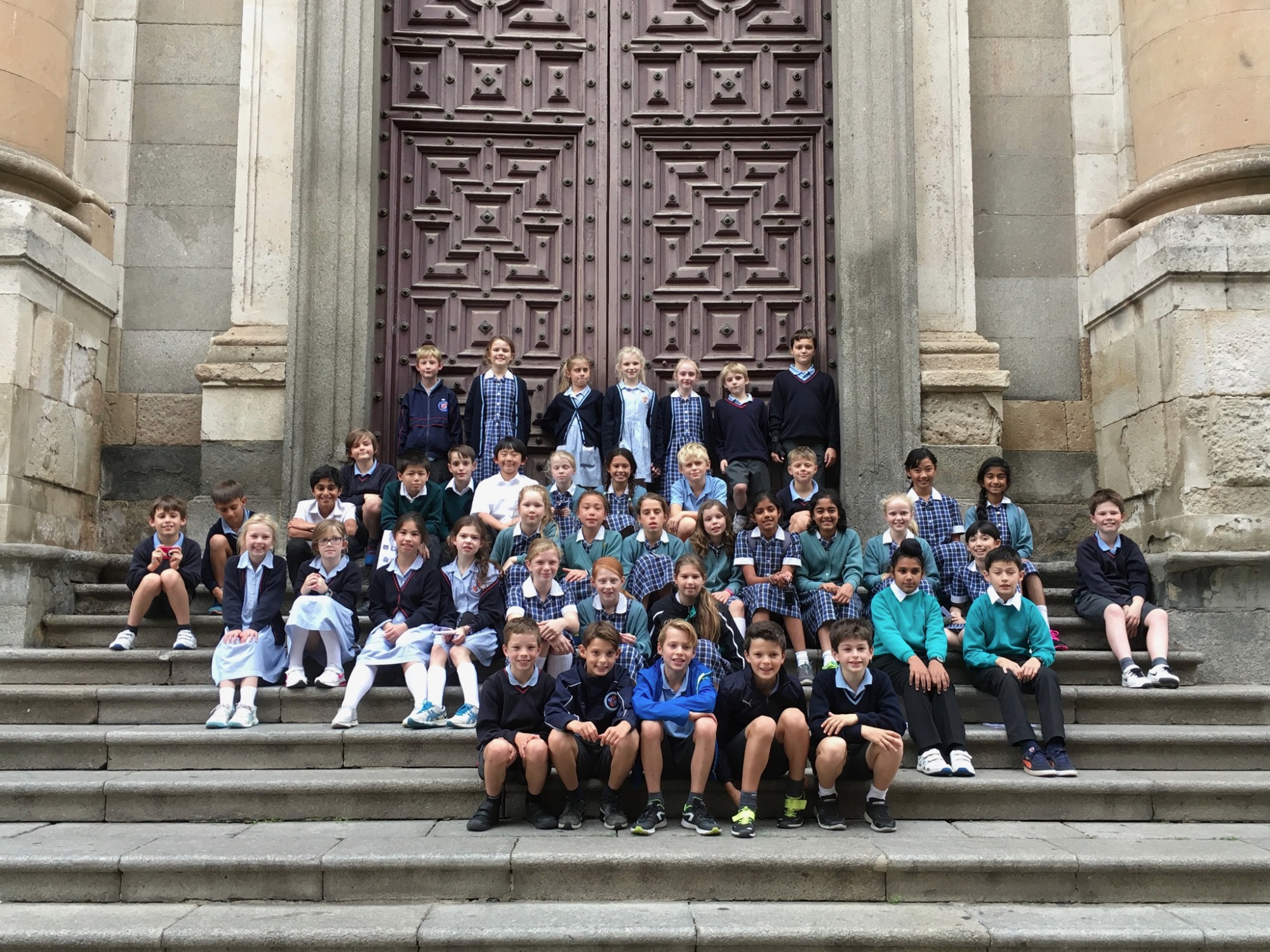