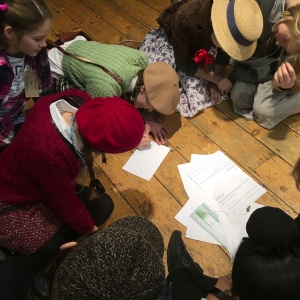 Year 6 go back in time and evacuate to Saffron Walden.

Dressed in appropriate 1940s clothing and feeling very excited, the Junior School Year 6 pupils were evacuated out of Cambridge to join their peers at Dame Bradbury’s in the safety of Saffron Walden.

"Being evacuated during WW2 would have been stressful and worrying and would have made you feel nervous and tense. The fear of the unknown as well as being separated from families would have left you melancholy and feeling alone." Abigael and Ishita

"However, being evacuated to Saffron Waldron in 2018 was interesting and great fun and sparked a lot of questions about the war, many of which were answered during our Year 6 collaborative day." Kristina and Ana

Once all together the Year 6 pupils got into their family groups, in which they were going to spend the day, and introduced themselves to their pen pals. These pen pals are going to write to each other over the next two weeks describing the thoughts, feelings and experiences of children who would have been evacuated during WW2. 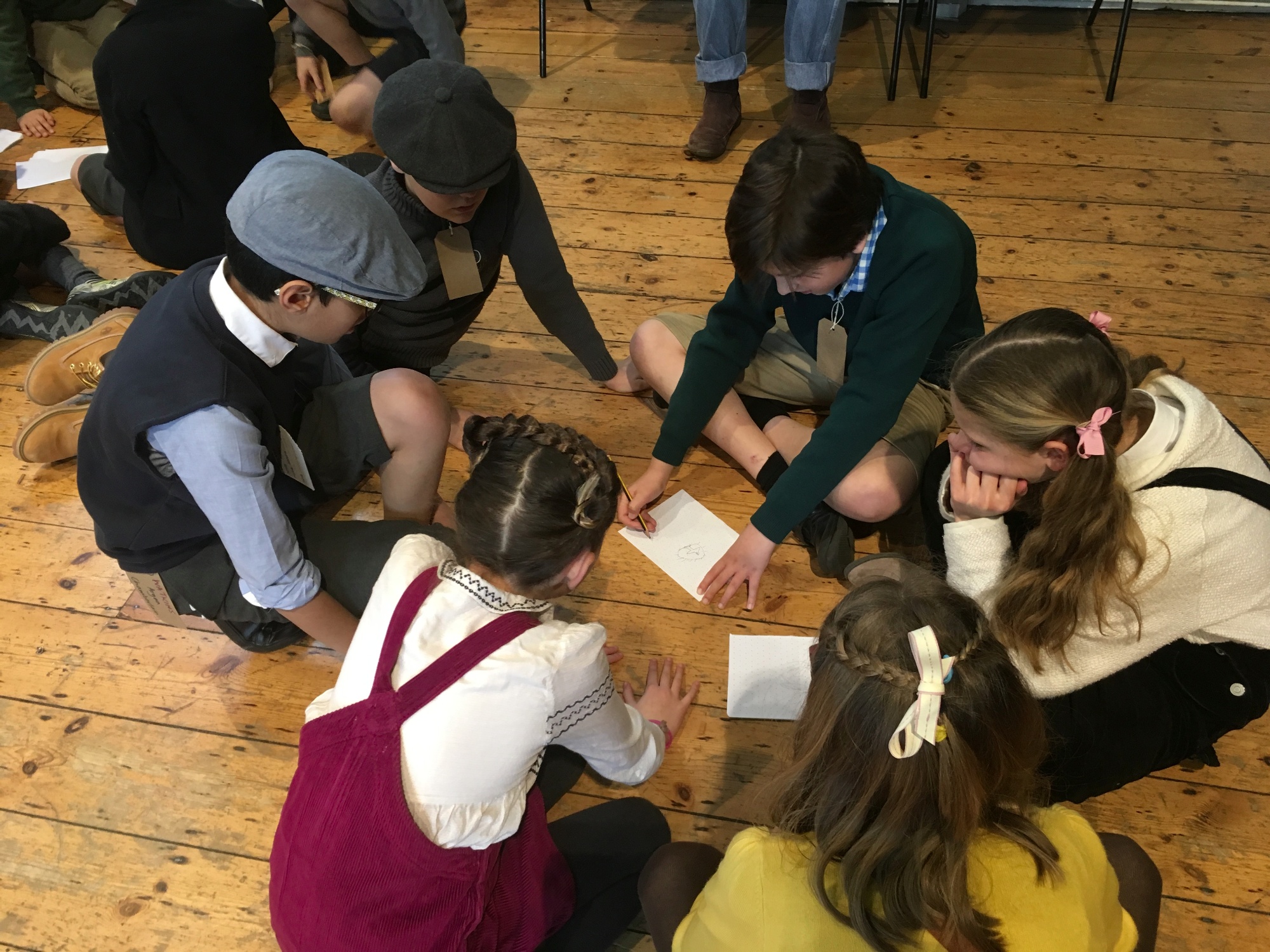 With introductions over it was time for Pictionary. How would you draw America, a gas mask, an air raid siren or Winston Churchill if you were invited to play the game?

"To play Pictionary you need good creative guesswork and a good understanding of WW2 vocabulary." Sophia and Orla

Next it was time for the first of the hands-on activities: creating no-bake chocolate cake!

Did you know that rationing continued for a long time even after the war? Year 6 learnt about foods that were rationed and how people spent their coupons during WW2. Then it was time to do some cooking! Who needs an oven to make a delicious chocolate cake? The pupils enjoyed measuring in imperial units, using balance scales to weigh out the ingredients to make their delicious chocolate cake. Using a camping stove, under close supervision, they melted the necessary ingredients and then mixed them together with everything else in a large bowl. Each pupil then poured their mixture into their own small tin to take away and enjoy at home. 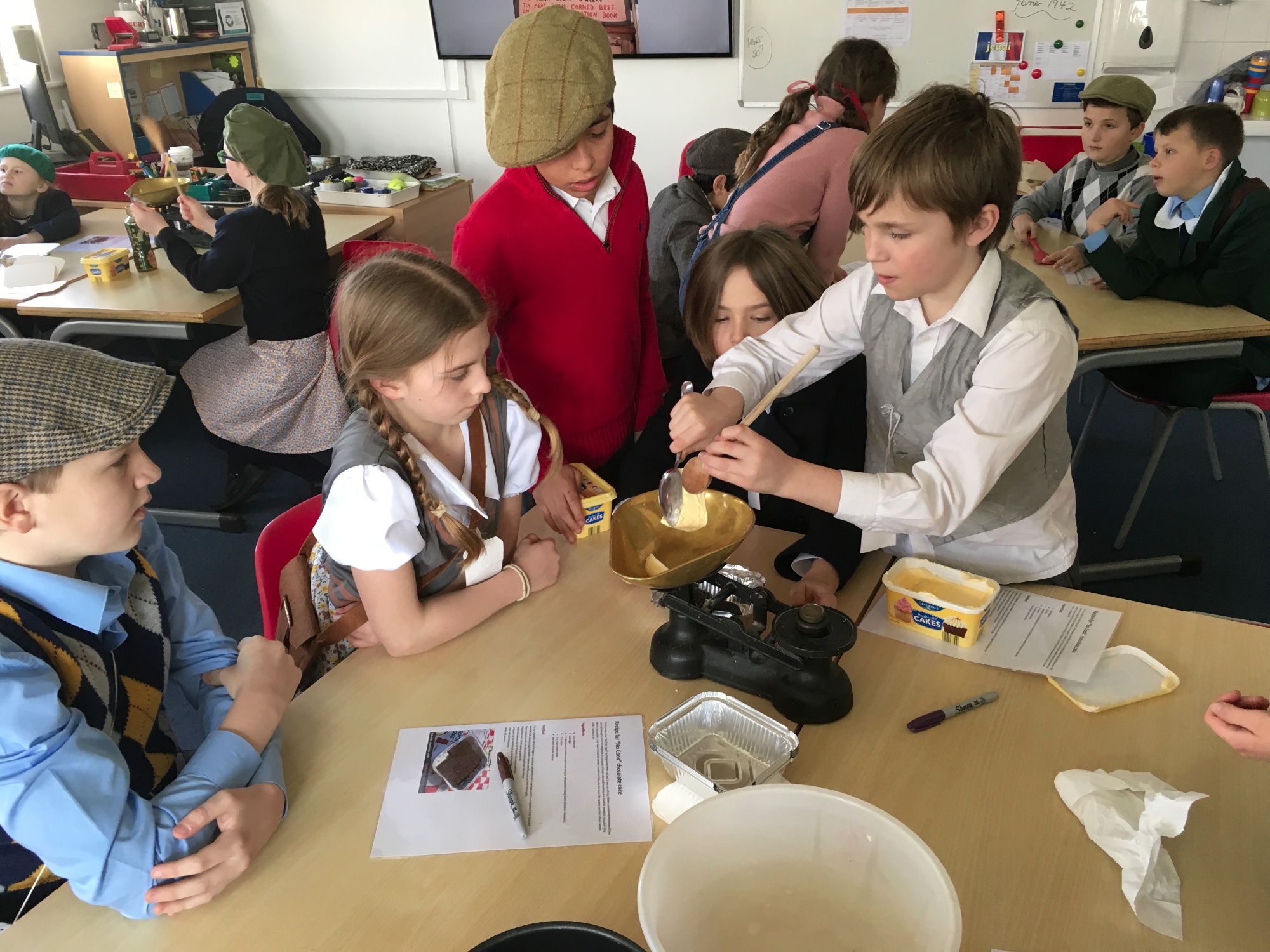 "It was a really fun task as I didn’t realise you could make things without an oven." Smera

"I’ve never measured in ounces before, but I eventually got into it." Alexey

"I didn’t know there were different ration books for different groups of people, such as children." Bethany

After inhaling all those delectable aromas of chocolate and golden syrup, everyone was ready to eat so it was just as well that it was time for lunch. 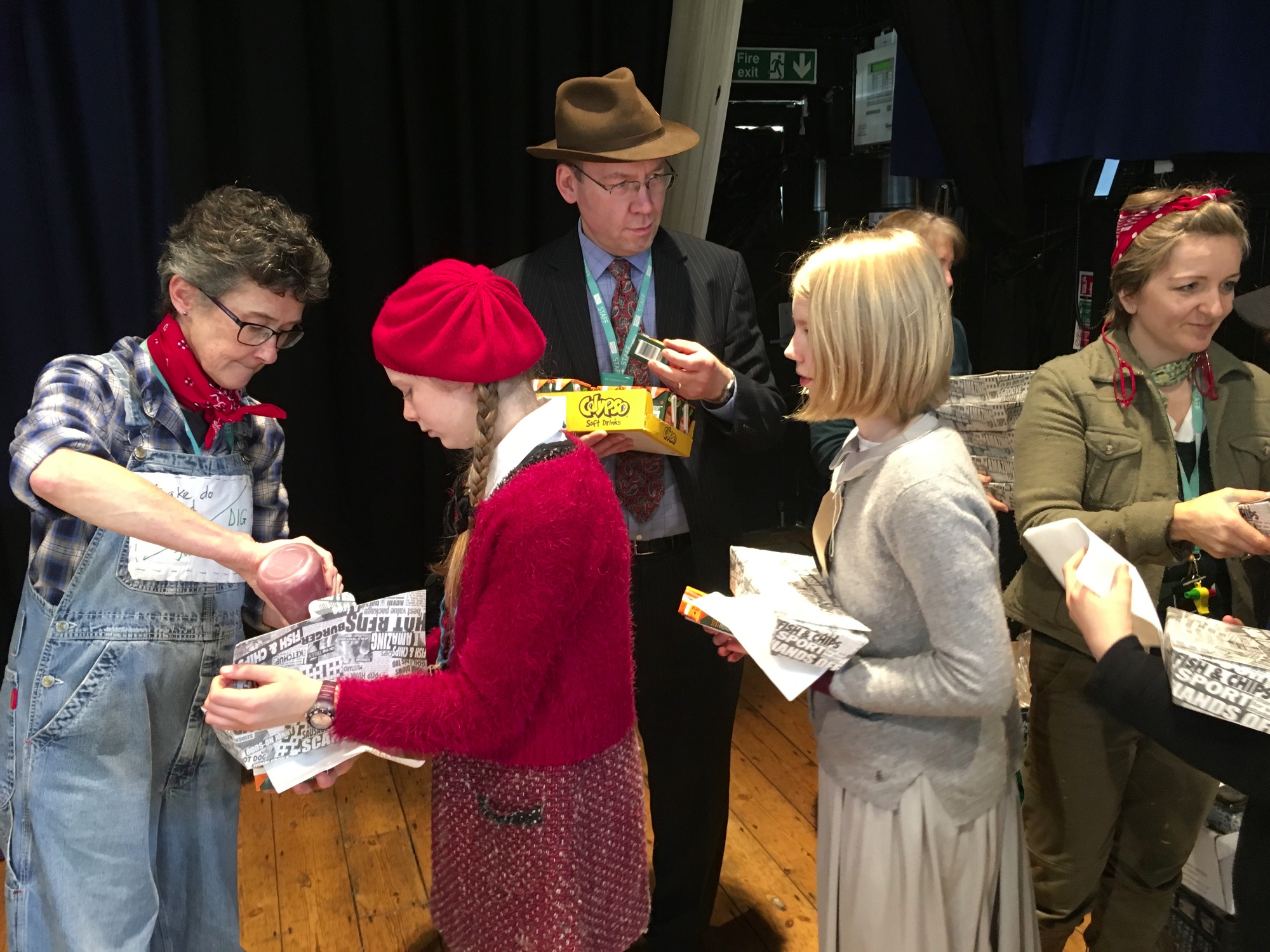 The fish and chips were so tasty - the fish was salty and ketchup sweet. A delicious combination." Utthara

After lunch, it was time for toy making. During this session Year 6 learnt how to ‘make do and mend’ a WW2 toy. First, they talked about what it would have been like to be a child during WW2 and how, when they were evacuated, they would not have been able to take many toys or other personal items with them. It would therefore have become necessary for children to make their own toys.

The family groups collaborated with each other to explore different resources and their properties in order to engineer a spring-type moving toy. They used pliers to bend and adapt the different angles of the wire in order to create a perfect flow from the top to the bottom. Adding two small paper planes to an additional horizontal wire created an extra challenge. Thinking critically, they ensured their design balanced and provided momentum in order to make the beam-like wire swirl around the elevated spring. They had lots of fun trialling and testing different theories and adapting their products at each step. 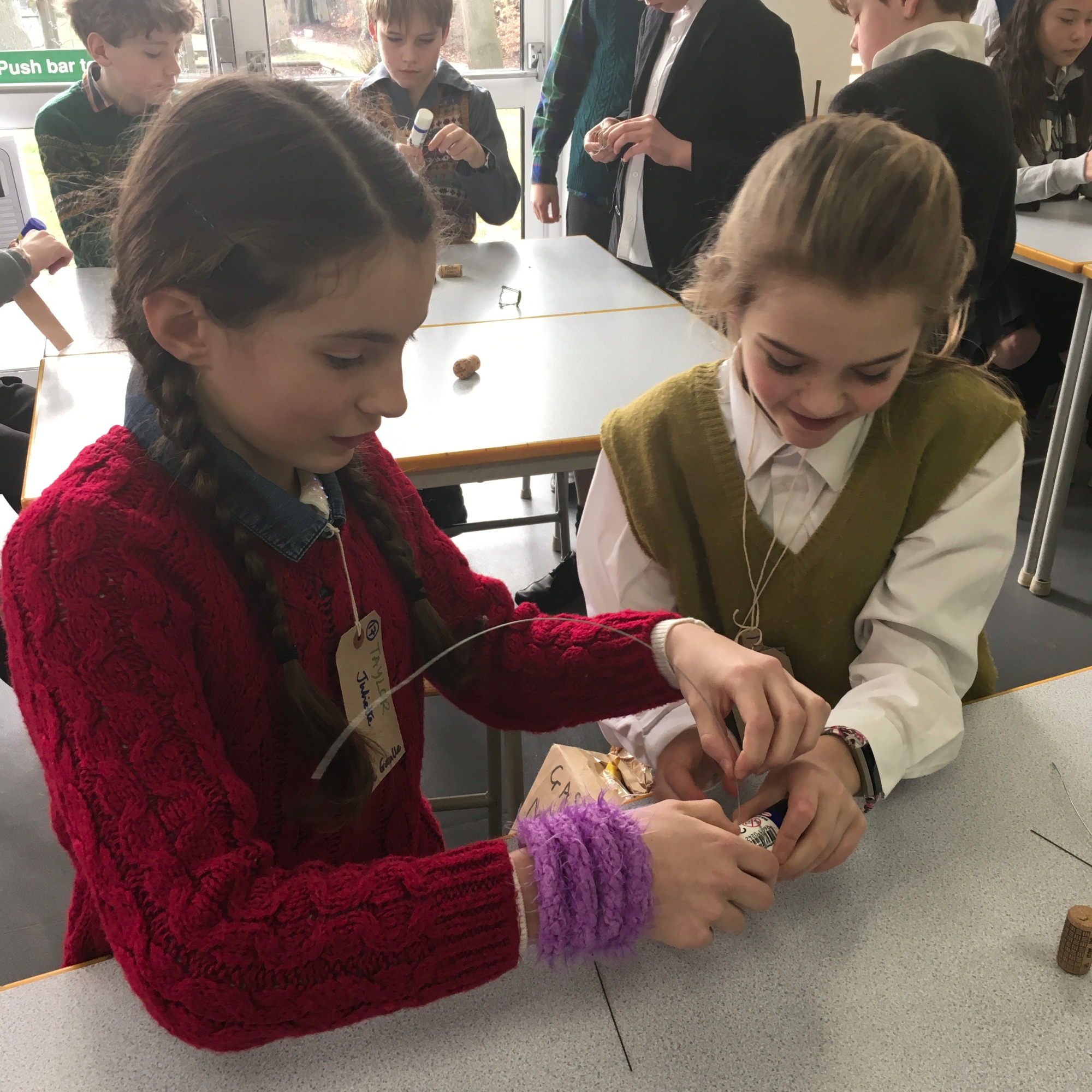 "Awesome! It looks like planes flying in the air." Molly

"During WW2 you had to make use of what you had and turn it into toys." Heston

"It was interesting to see what kind of toys they would have made and played with during WW2. I like the idea of the planes on each side making a spiral". Haruka

"I really really enjoyed it. It was inspirational and interesting to see the planes actually moving with the materials we were given." Alexandra

"Amazing, it’s really fun. You had to make sure the beam is smooth and level otherwise it wouldn’t balance. It’s quite clever really. Yes, it worked!" Jaylan & Sam

"I like making the spiral whirly bit with the pliers. I didn’t think you could make a toy with these materials." Chloe T & Chloe B

Our day together ended with a wonderful sing along, marching in time to the beat of ‘It’s a long way to Tipperary’ and belting out ‘Pack up your troubles’! What a joyous end to a varied and stimulating day, packed with learning opportunities and giving Year 6 pupils across the Foundation a chance to immerse themselves in many outstanding and thought-provoking WW2 experiences. 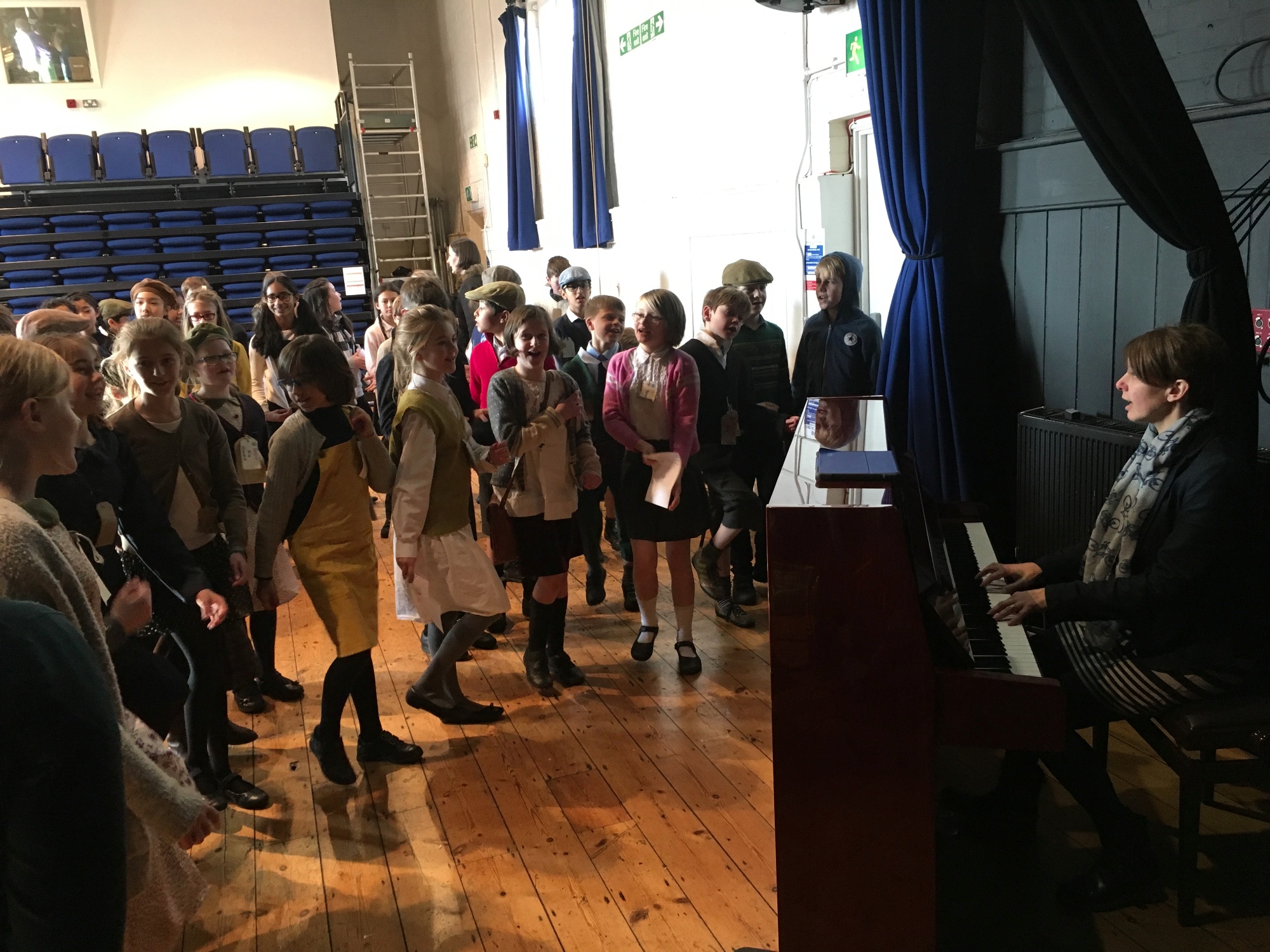 We extend warmest thanks to all at Dame Bradbury’s for organising and hosting such a brilliant collaborative project day.