Celebrating a Maths Factor Graduation with Carol Voderman and Bronze Award in the Primary Maths Challenge.

Two of our pupils at Dame Bradbury’s took part in the Maths Factor Graduation in London with Carol Vorderman. They signed up for the Maths Factor programme a year ago and have been doing 10 minutes of maths  every day on the Maths Factor - watching videos, practicing and playing maths games. Along the way they earned medals and cups.

Saturday 10 March was a special day for them, when they received their gold cups and a certificate marking their achievements from Carol Vorderman herself!

A huge well done to George and Saffron W.

Most of our Year 5 and 6’s, and three of our Year 4 pupils, took part in the Primary Maths Challenge in November. Nationwide, 68,000 pupils entered with 3,255 pupils who scored 20 or more being invited to take part in the Bonus Round in February 2018. Jonny R from Year 4 achieved 21 marks and went through to the next round.

In February Jonny sat the Primary Maths Challenge Bonus Round and achieved a score of 17 - just one mark off silver. An absolutely fantastic result! 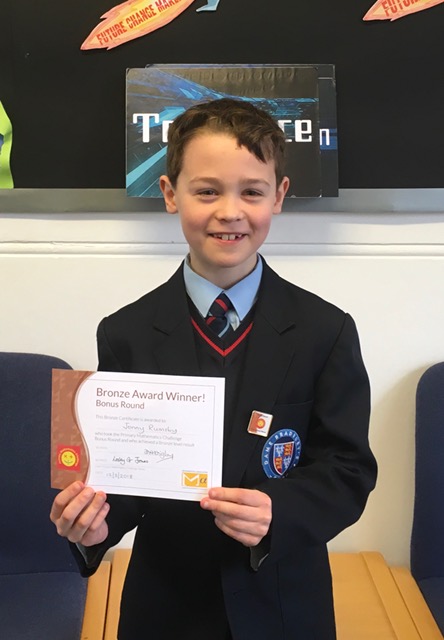