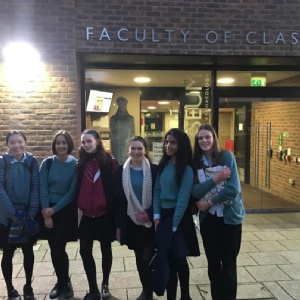 On Wednesday 8 November, six students from the Senior School and four students from the 6th Form College travelled to the Faculty of Classics to show that Latin and Ancient Greek are well and truly alive in Cambridge.

Every year, schools from all over the city come to compete in the Cambridge Classical Association’s reading competition. This year, the competition was tough indeed with a record number of competitors taking part.

The Stephen Perse Foundation blew away the competition to continue its incredible run of success: we not only brought the largest contingent of readers to the competition but we were also the most successful school with 2 winners, 4 second places and 1 person being highly commended:

Vivian L, Kai S and Elena R also read their passages really fluently and expressively but were pipped to the post (or rather, in Mr Lord’s obviously entirely unbiased opinion, robbed) on the day.

Crucially, we were the only school to place in every single category which is a real testament to both the strength of our students’ performances and the sheer number of pupils who were willing to put in the hard work auditioning and rehearsing as well as competing. Every member of the team who took part made huge improvements to their performances through plenty of practice and should be incredibly proud of themselves.

Special thanks must go to Mrs Jones who once again produced a set of incredible recordings that our students work hard to rehearse from and fine-tune their pronunciation with.