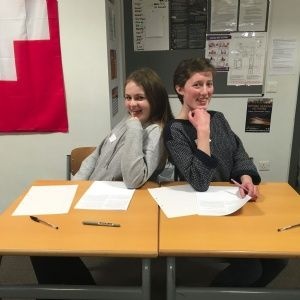 On Wednesday 7 February, three teams of keen francophiles from L6 and U6 made their way over to Perse Upper to take part in the regional French debating competition with other schools, including Oundle, Bedford Girls, Perse Upper and the Leys.

U6 and L6 students had to debate motions such as "The Olympic Games are more harmful than beneficial for the host city", "Marriage is no longer useful nowadays", "France should maintain its quota of francophone music on the radio", "We should lower down the age of vote to 16" and "Prison is a bad response to punish criminality". The competition was intense and there were emotional exchanges during the 'lutte acharnée'. This was all conducted in French bien sûr!

Georgina M and Beth S made it successfully through to the final again​​​​​st Perse Upper. The surprise motion was "Learning a language is useless nowadays". Beth and Georgina fought their corner well and defended all the benefits of not learning a language, so we were thrilled to see them win! We look forward to their participation in the national final in London on Tuesday 20 March 2018. Watch this space for the results.