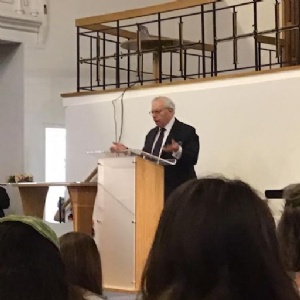 Today we learnt about a range of topics including Mary Tudor, Henry VIII’s reformation, Elizabeth’s golden age and Henry VII.

We started off by being asked the question ‘should the reign of Mary Tudor be considered unsuccessful?’ Susan Doran introduced an interesting discussion on Mary’s unpopular marriage to Philip II of Spain. He was Catholic and foreign, making him England’s enemy. Mary’s marriage was met with much opposition and triggered the popular uprising which was, Wyatt’s rebellion in 1554. Philip was unpopular because he was Catholic and the ruler of England’s biggest threat at the time. The English were worried that Phillip would manage to gain control over England as Mary was seen as a weakness due to her gender. However, Philip didn’t end up having much interest in England and after Mary’s ‘phantom pregnancy’ he seemed to disappear from the scene. Mary’s loss of Calais in 1558 gave Mary a bad reputation as on top of her being seen as a weakness for being a woman, she lost England’s most important territory in France which was important for demonstrating international power. At this time it was a big loss and also a national humiliation. We also looked at the successes of Mary’s reign which included the Catholic reformation and concluded that as Elizabeth became queen against Mary’s previous wishes, her rule can be seen as unsuccessful.

We were also given an insight into the impact of Henry’s break from Rome. John Morrill examined the reasons for the reformation which included the insecure dynasty as Henry didn’t have a legitimate heir. We were told about the propaganda that was needed to gain support for the reformation and what would happen if it wasn’t supported. We learnt more about the so called ‘golden age’ from 1558 to 1603 that was the Elizabethan reign. This involved the Spanish Armada of 1558 and the threat of Mary Queen of Scots. The Spanish Armada boosted Elizabeth’s reputation and was seen as a great victory for the English as Spain was a big international power. Although it didn’t end the wars with Spain and it was very costly for England in the 1590s.  A major problem for Elizabeth was Mary Queen of Scots because of Mary’s potential legitimacy to the throne. Elizabeth didn’t want to execute Mary because she was family and a fellow female queen. But Mary created unease and paranoia in England and in 1587 she was beheaded for treason.

Lastly, we were lucky enough to listen to David Starkey talk about Henry VII and his claim to the throne. It was interesting to learn that he wasn’t from the direct line of monarchs and had a weak claim to the throne and as Starkey joked, as did Theresa May to be Prime Minister. We learnt that Henry lived in France for most of his life and so when he came over to rule he wasn’t familiar with the aristocracy and had limited knowledge about how England worked. This was a weakness for Henry, because it was essential that he had links within the Government. Despite Henry’s weaknesses, he gained support from the people and managed to become King of England in 1457. He worked to increase financial stability and therefore the sense of security within the country by imposing huge fines on criminals instead of executing them.

The talks were very interesting and educational and benefited us with a wider knowledge of the periods we are studying.