Year 6 take on the challenge of learning German and Mandarin 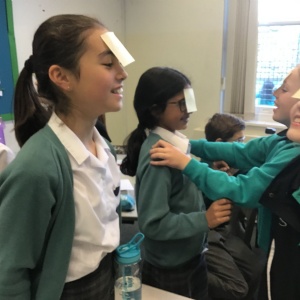 I’m not sure that St Nikolaus found his way to Rosedale House on 6 December, but the year 6 pupils did discover quite a lot about German as well as Chinese culture during their Language Taster Day.

With their usual positivity and enthusiasm they sang songs, tried writing new characters, got their tongues around all sorts of new sounds and managed to learn a large number of words in German and Mandarin in just a short time. With plenty of questions, games and quizzes, they were soon spotting similarities and differences between familiar languages and the new ones.

The idea was to give the pupils an introduction to languages which they may choose to take up as they move on to senior school and clearly they are ready for the challenge. Within a matter of hours, aided of course by our Year 6 resident German and Mandarin experts, the classrooms were buzzing with children confidently counting, introducing themselves and following instructions in new languages. In science and art lessons the theme continued as they learned about Tu Youyou, Nobel prize winning scientist, and drew arty maps of German-speaking countries. It is good to see our young people valuing the importance of communication across continents.