Remote enrichment sessions have gotten underway this term so that pupils can continue to get involved with the subjects they love. The psychology session started by looking at optical illusions.

Pupils were shown examples of optical illusions such as the necker cube. You can see it facing either way, and the idea is that your brain is hypothesis testing and that is why you can switch the view:

Pupils also looked into this illusion trident which they had to see if they could draw:

In the 1960s and 1970s, this illusion was tested on people from Western society, where 3D art was common, and people from isolated African tribes. They found that the people in the West found the trident hard to draw and it took them longer because they were trying to make sense of it in a 3D fashion, whereas the people from the African tribes were only drawing what they saw. In their culture, they preferred split style drawings which show all the features of something. For example they drew an animal as if you have turned it into a rug by splitting it open and laying it out. See this example from Deregowski's study on pictorial perception: 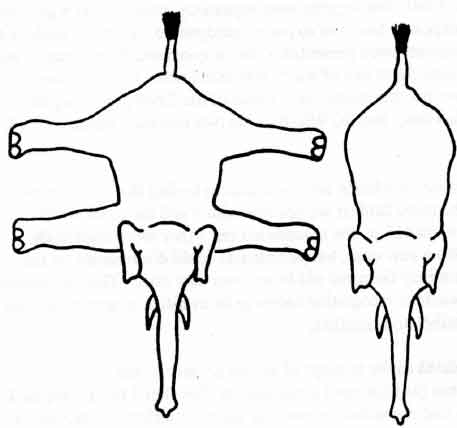 This video of the Charlie Chaplain illusion illustrates how perception is not just bottom up (based on the light bouncing off objects and into your eye) but must also involve some top down influence (information from long term memory).  In this case, the knowledge that a nose always points outwards makes the hollow inside of the mask look 3D.