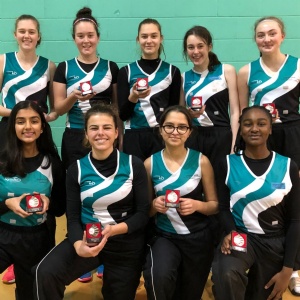 We are hugely proud to announce that our U16 netball team has been awarded Netball Team of the Year in the Cambridgeshire County Netball Awards 2020.

The organisers of the award, the Cambridgeshire County Netball Association (CCNA), encourages play in all ages and abilities, develops players through coaching and helps fund netball in our region.

The CCNA awarded our U16 team the title following their success in winning the U16 county schools tournament,  landing runners up at regionals and for the first time in our school's history, qualifying for the England Schools National Finals.

Director of Sport at Stephen Perse, Charlotte Wells, commented "We are thrilled that our U16 netball team have won this prestigious award. They have been the most successful team in our school's history, racking up tournament and county wins along with unbeaten seasons. It is fantastic to have their dedication and achievements recognised in this way. They are an inspiration to all and we are so, so proud of them."

You can watch the Cambridgeshire County Netball Awards 2020 below, skip to 4:19 to see our team win their well deserved award.