Year 8 perform production of Beauty and the Beast 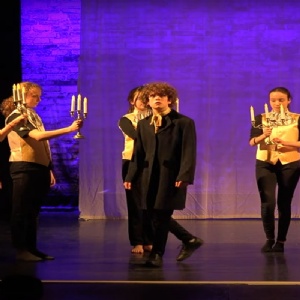 Our 2021 Year 8 production of Beauty and the Beast feels like a particularly special achievement this year. It has taken a full 18 months to realise from start to finish but despite the unprecedented circumstances and the extraordinary challenges we have faced, we were finally able to complete the project in the last week of April 2021.

Laurence Boswell’s adaptation of Beauty and the Beast is based on the traditional fairytale, however he has added his own take on the magical palace of the Beast. The script offers enormous potential for creative ensemble work and we made the most of this in our production which was very visual and included some fabulous movement sequences, choreographed by the students themselves.

As a live audience could not attend, the performance was filmed over two evenings and we have been able to share edited films of Act 1 and Act 2 with parents and with our Year 8 students.

I am delighted to be able to share with you the production showreel which I hope will give you a flavour of the style of the show and the enormous amount of creativity that went into it.