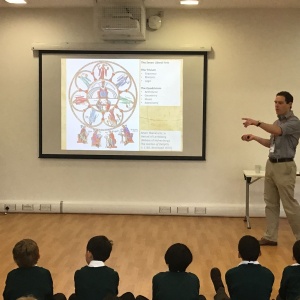 Year 5 & 6 pupils at both Dame Bradbury’s and the Fitzwilliam Building were treated to fascinating talks about Medieval Science from a leading expert, Dr Seb Falk, a historian of science at the University of Cambridge. The pupils were provided with a unique insight into the little-known scientific and educational world of the middle ages, a period whose intellectual achievements are often unfairly overlooked.

We started by discussing what science is, how scientific ideas have changed over the centuries and how the use of scientific instruments for measurement and observation affects the kind of science that gets done. The pupils were able to get first-hand experience of one of the most influential scientific instruments in the history of science: the astrolabe. Two working replicas of these beautiful brass devices were passed around, helping the children to appreciate the complexity of design and use of these instruments, first developed in Ancient Greece and then used throughout the Islamic and Christian worlds in the Middle Ages and beyond.

Both sessions were very much a two-way process, with our pupils showing lively and perceptive thinking skills during the course of the talks, with lots of thoughtful questions and answers, putting into practice what they already understand about the scientific method. For instance, when asked what they thought the astrolabe might be used for, they were able to recognise features on it like zodiac signs, lines, numbers and names of months, which suggested it had something to do with measuring time and observing the sky: correct!

Out of the rich detail covered in the talks, two things stood out for the pupils. One of these was the kind of education on offer during the Middle Ages, with many differences from today, of course, but also some surprising similarities: for example between the logic taught back then and our modern emphasis on thinking skills. The children were surprised to learn that Music was treated as a science in the medieval curriculum, which allowed Seb to point to the mathematical patterns behind musical harmonies, as illustrated by a quick impromptu demonstration on the piano!

The other striking feature was the opportunity to see slides of some of the beautiful illustrations from painstakingly handwritten medieval science textbooks. One of these, from a classic astronomy text called ‘The Sphere’, struck a particular resonance with our pupils: a geometrical diagram showing how the differing views from the top and bottom of the mast on a ship provides evidence that the Earth is spherical, something we have been covering recently in our Science lessons.

We are extremely grateful to Seb for taking time out of his busy schedule to come and speak to our pupils, opening their eyes to the wealth of scientific activity going on during what is commonly thought of as a ‘dark age’ in human knowledge and helping to enrich their understanding of how scientific practice and ideas change over time.