History Week was launched with an assembly led by former Head Mistress Katie Milne- she presented an enlightening history of our school and gave special house gifts to every pupil. Each year group had museum visits, speakers, competitions and quizzes to fill their week.

Year 1 had great fun learning about the Ancient Egyptians. Our pupils learnt all about the pyramids, the mummies and the River Nile. They enjoyed learning about it so much that they decided to make a ‘Find the Pharaoh’ game for our playground sale! One of our parents, Mr. Holland came in to talk to us all about his expedition to the Arctic. He talked to us all about other expeditions to the North and South Pole in history and even about Titina, the first dog over the North Pole! After his talk, the pupils made posters to celebrate Titina the dog and his bravery. At the end of the week they learnt all about the Queen’s Platinum Jubilee. They were amazed to find out that the Queen was crowned before our parents were even born! Year 1 then designed a Jubilee tea towel, drawing pictures of Queen Elizabeth herself, her corgis and Buckingham Palace.

During our History Integrated Learning week, Year 2 had the wonderful opportunity to participate in an educational 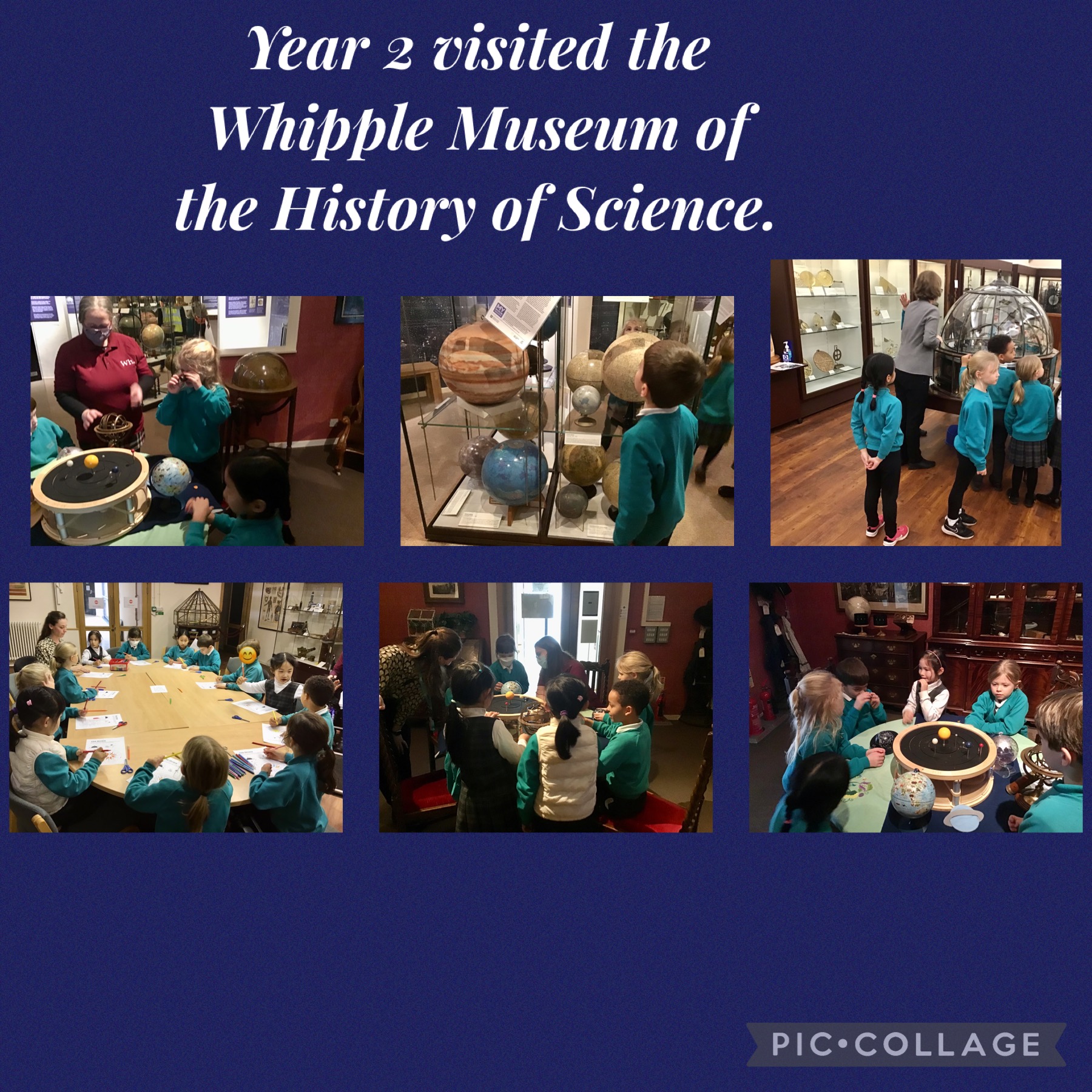 session at the Whipple Museum of the History of Science.The pupils in Year 2 were fascinated by the museum's collection of scientific instruments, models, prints, books and so much more! They learned about an orrery and how it can help us understand how the moon moves around the Earth and the Earth around the sun. Year 2 also had some time to take a closer look at the telescope and a variety of both terrestrial globes and celestial globes. It was an afternoon full of learning all about Earth and space. Year 2 also enjoyed the talk by Mr Holland, who came to talk about his research on the Polar Region Explorations and the heroic age of Antarctic exploration. The children learned about Roald Amundsen and his expedition to the South Pole. They were particularly fascinated by how cold these regions get and the number of layers one needs to survive in the arctic regions.

Year 3 totally immersed themselves in all things Viking during our Integrated History Week. Saga songs brought Norse Gods to life, they built Viking 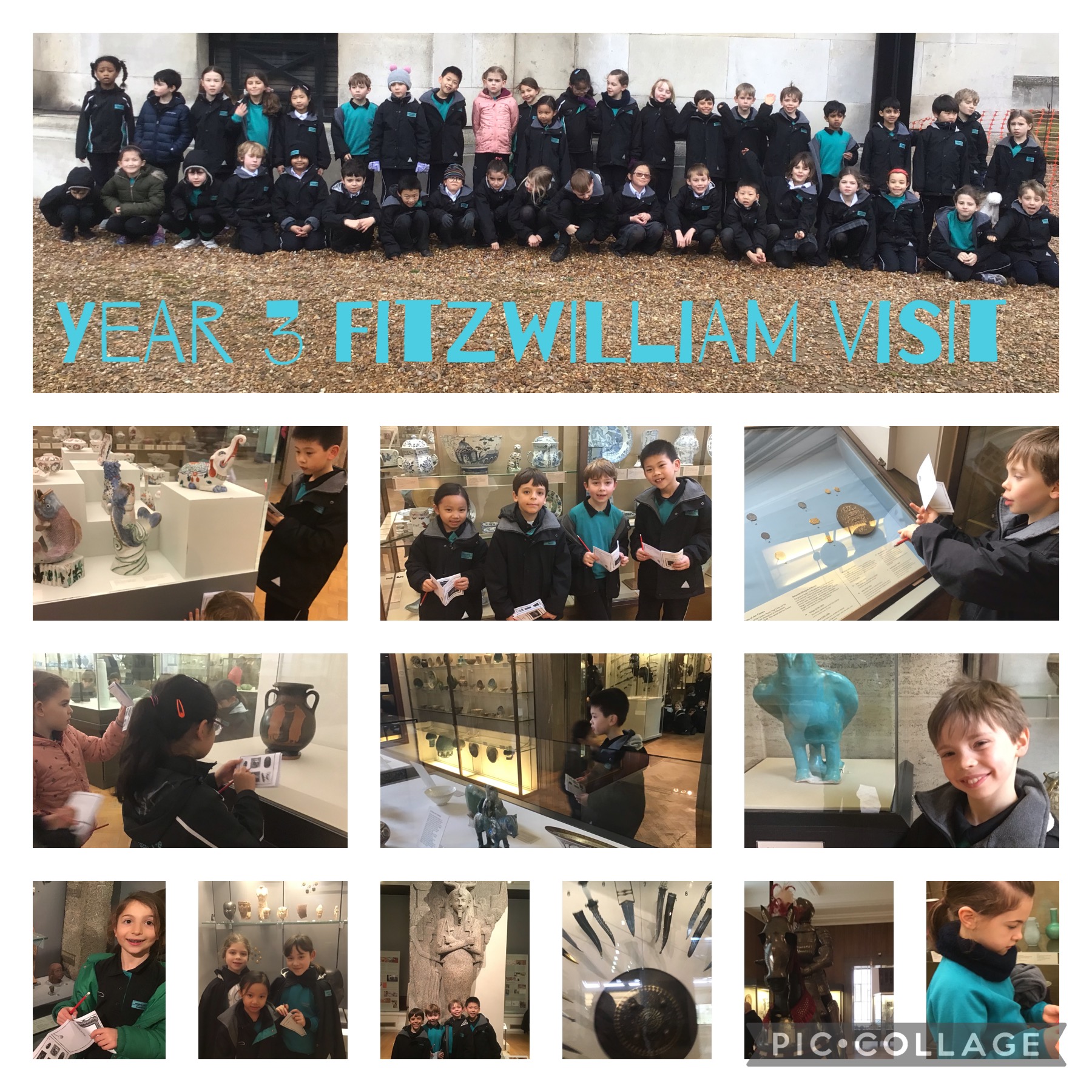 longboats and even had a go at playing Hnefatafl… Viking Chess! They were somewhat surprised to learn that unlike the Viking portrayed in cartoons or movies, they were not simply horn-helmet wearing warriors but they were in fact explorers, craft workers and very capable farmers. Miss Milne, our previous Head, led a hugely informative assembly on our school history and even gifted all pupils House pencils. Our keynote speaker, Dr Rosalind Crone, got everyone thinking about ordinary people from bygone times. She challenged our thinking about what a historian actually is and how we view the past. It was fascinating looking at old jail records and the astounding amount of information that could be gleaned from them. Naturally, this got everyone thinking about their own digital footprints and how this might be viewed by future historians. History trails, Family History Projects, timelines and a local museum visit added great excitement to the experience. The week was rounded off with a historic moment of our own, the first Playground Sale on the Fitzwilliam site.

Year 4 pupils really enjoyed history week. They contributed to the whole school timeline with 4A 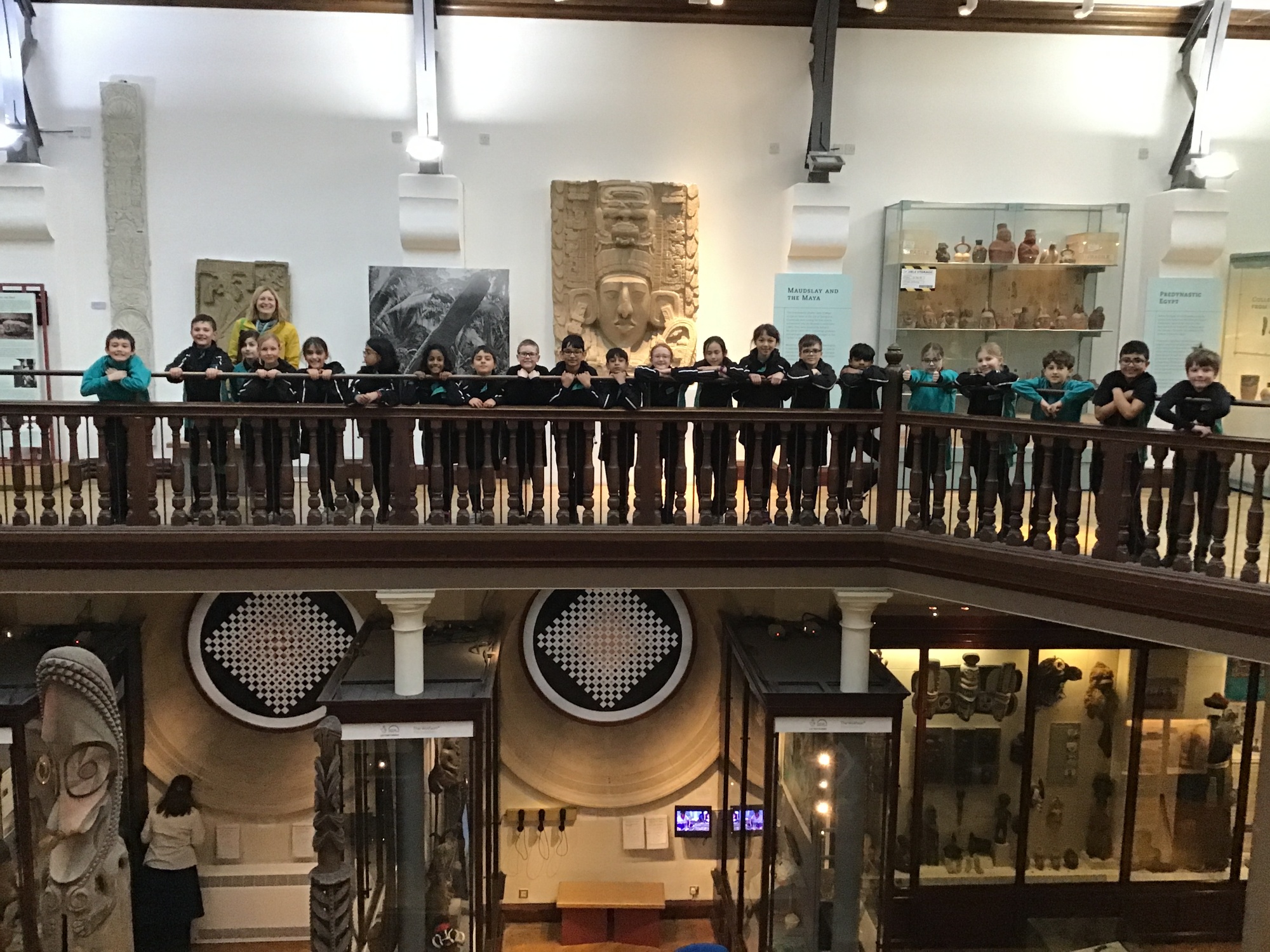 focusing on events during WW2 and 4 Alpha exploring Kings and Queens in the Tudor period. Along with Year 3, they enjoyed a very engaging talk from Dr Rosalind Crone who really made pupils reflect on what history is and how we can learn about events that happened in the past. One of the highlights of the week was the visit to The Museum of Archaeology and Anthropology. Pupils had to search for various objects in the museum, such as the finest moustache and the smallest dragon. Great fun was had planning the history themed events for the playground sale and even more fun exploring what the other year groups had prepared.

Year 5 had a busy week which started with the sixth form history society demonstrating the effects of hyperinflation in Germany in the early 1920s. Using role

play involving chocolate, the History Society members became bankers and shop keepers, and 5 Alpha became doctors, teachers, factory workers and businessmen. Through this role play the pupils were able to understand what happened in Germany during hyperinflation and the knock on effects. Year 5 had a visit from the Scott Polar Museum, which took Year 5 pupils on a real life remote expedition led by Captain Scott. The main group set up camp, while a small group of 6 men were dropped off 100 miles along the coast. The pupils then had to make difficult choices to ensure their survival. Eventually 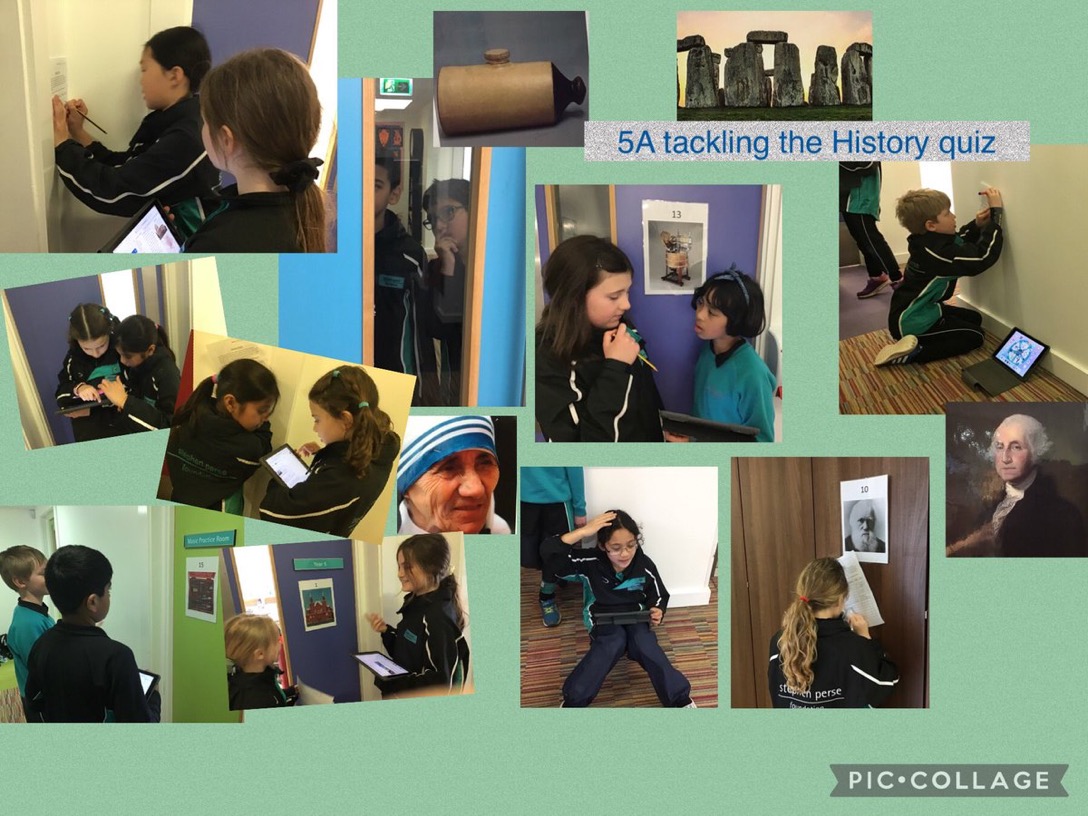 they all made it safely back to the main camp. Year 5 were then treated to a talk from Professor Paul Cartledge, who explained about his journey to becoming a historian. He is particularly interested in Greek history and told the pupils about the battle of Thermopylae. He explained that both men and women were heroes in the battle and he was able to explain similarities with the current situation in Ukraine. In addition, the Year 5 pupils learnt about the Industrial Revolution to create slides for the whole school timeline, searched the school for information to answer the quiz questions, and had a lot of fun preparing their stalls- History Hoops; Victorian Lucky Dip; and Shoot Through History- ready for the playground sale.

As part of our integrated learning, History Week encouraged the whole school to focus on personal, local and global historical issues. Year 6 visited the 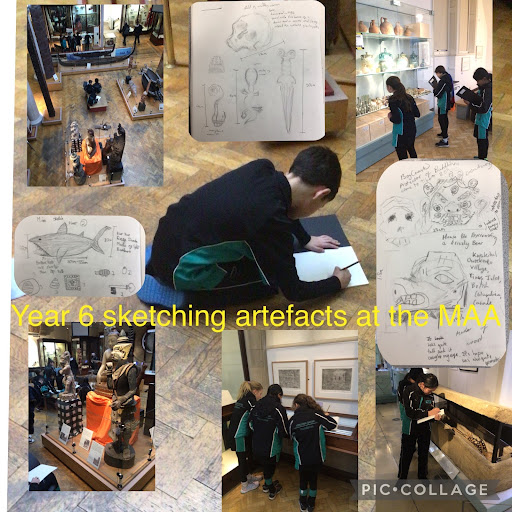 Museum of Archaeology and Anthropology at the beginning of the week. After a brief tour of this delightful museum, the children were given time to explore on their own, in order to locate artefacts that they would like to sketch. These sketches would be brought back and worked on in school CDE lessons, turning their pencil drawings into Cubism 3D art. The skeleton in the coffin and the model shark caught the eye of many of our budding artists, as well as necklaces made from bone or teeth, weapons, like spears and arrowheads, coins, clothing, pots and much more.

All Year 6 took part in the History Hunt- this was an opportunity to earn house points, as each sheet was marked and house points awarded accordingly. Year 6 contributed to the whole school timeline- the focus was the Space Race from 1957 onwards. This proved a very popular topic and time in history.

Both Year 5 & 6 pupils gained an inspirational insight into science in the middle ages with a talk from Seb Falk, and enjoyed the Ancient Greek talk from Professor Cartledge. A lot of fun was had in the playground sale. Many Year 6 pupils were able to support the younger children to navigate the array of brightly coloured stalls.

We were so impressed with all the hard work that went into creating the family history projects. We all stepped back in tim 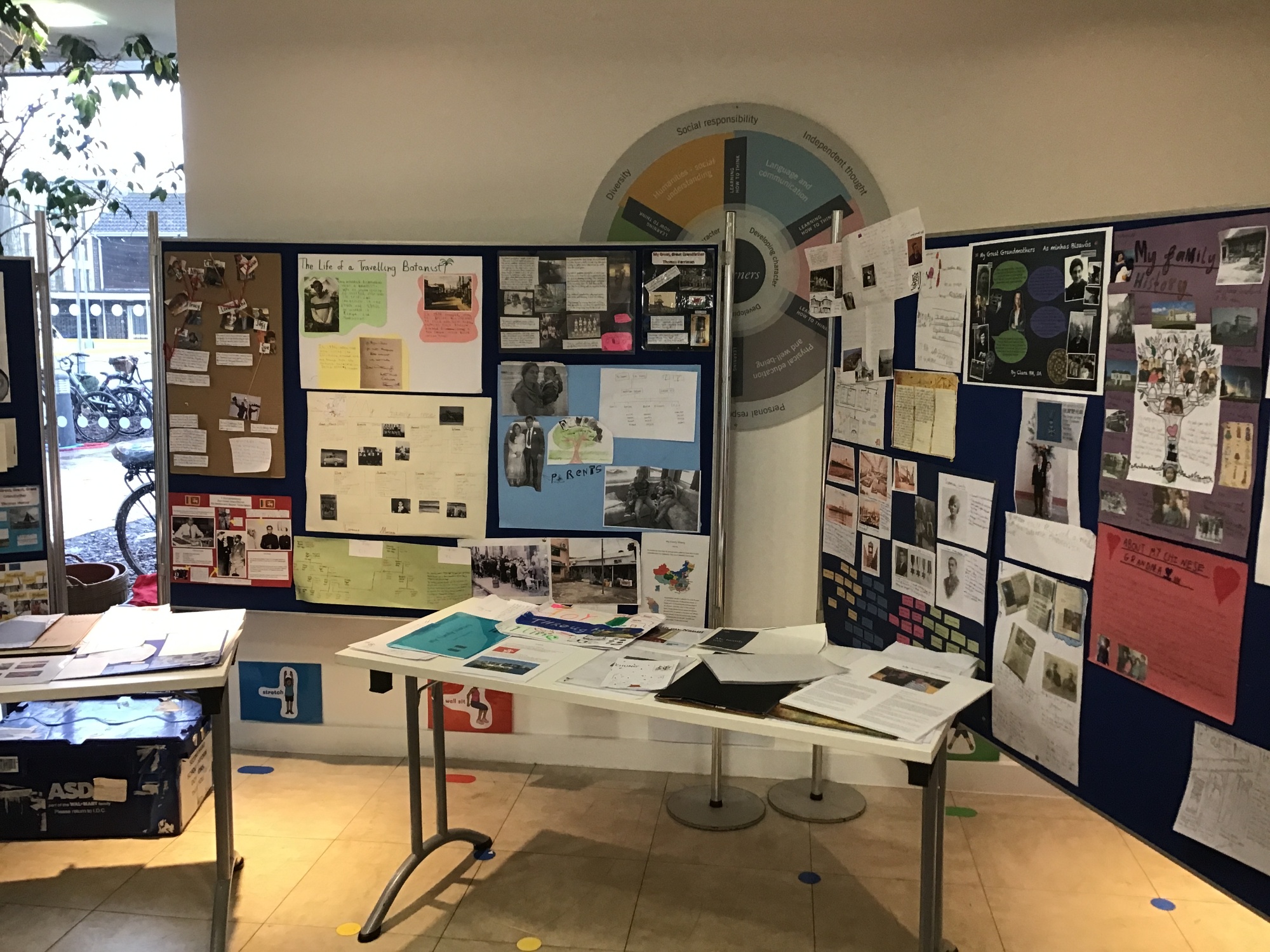 e as we walked through the reception area of the Fitzwilliam building and were treated to a snapshot into the lives of our pupils' ancestors. Thank you to all the parents who supported their children to learn a little more about their own personal history and were happy to share the information with a range of incredible posters, scrap books and mementos.

An excellent week full of learning!