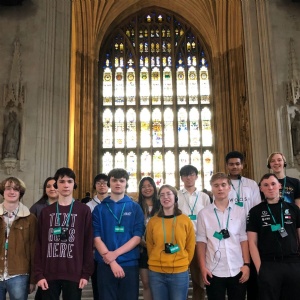 On Monday 27 June, 12 Politics/Sociology students, along with three teachers went on a trip to Parliament. By Sixth Form Student Alistair.

This was a fantastic opportunity to see the inner workings of Parliament in person, with the session including a tour throughout both Chambers, and the Royal Gallery within the building. James, a Politics student in Year 12 said: "The trip was actually better than I expected, we even managed to stand next to the throne in the House of Lords where the Queen's speech was given! Overall the experience really allowed us to delve into the insides of Parliament which I greatly appreciated".

We were given a personal tour around Westminster Palace (Parliament) including areas of the building the general public are not usually able to visit. This included standing within the Chambers of the House of Lords and the House of Commons. What was especially awesome was the fact that later that day, during a debate surrounding the government’s power to change the Northern Ireland Protocol, former Prime Minister Theresa May gave a speech in the exact spot where we stood a couple hours prior. The trip also provided valuable insight into the inner workings of the British political system, including the set up for swearing in a new MP to Parliament. This was due to the recent by-election in Wakefield, and we even got to see the new MP for Wakefield during the tour.

Bio, another student who went on the trip summed up what made the trip so special, the ability to “Listen to all the information in the real atmosphere”. “Being there in person, each room which I had seen hundreds of times as a Politics student looked similar but not alike to what I knew. In my opinion the chambers seemed smaller than they appear on camera, although also taller. Being able to touch the benches and see the Despatch Box makes everything more real.”

One of the highlights of the trip was meeting our local MP Daniel Zeichner who took time out of his day to speak to us and answered our questions. This included receiving insight about an upcoming bill he was giving a speech about, a previous bill he attempted to put through Parliament and what being part of the shadow government is like. It was great to see the local link between Parliament and Cambridge.

The trip also included an interactive session surrounding the legislative process, which ended with a Mock Parliamentary debate, which ended up being very fun. The Year 12s formed the Governing Party whilst the Year 11s were the opposition, and the debate was held on the issue of University Tuition Fees. Through the power of debate, rebuttals and open corruption the bill passed!