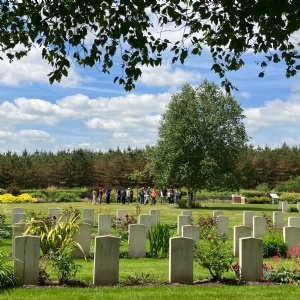 Although we weren’t able to go to France and Belgium this year, on the 20 and 21 June, Year 9 went to Cannock in Staffordshire on a History and English trip to learn more about World War I.

In and around Cannock there are a lot of memorials and cemeteries for soldiers who lost their lives during WWI. In the National Memorial Arboretum, trees had plaques dedicated to certain soldiers. Something that stood out there were wooden poles, meant to symbolise the posts that the soldiers who were shot at dawn were tied to. These soldiers were meant to have committed capital offences like desertion, so they were killed, sometimes by people in their own regiment - their friends. The tour guide made us stand by these poles to try to simulate what would’ve happened. There were also plaques to celebrate those who had won a Victoria Cross medal.

We also visited two other memorials that were in close proximity to one another - Cannock Chase German Military Cemetery and Cannock Chase War Cemetery. Cannock Chase was significant in WWI as it became the base for the New Zealand Rifle Brigade and was also a prisoner-of-war hospital. The Cannock Chase Cemetery contains 379 burials, including 100 Commonwealth burials, most of them from New Zealand. One grave that stood out to us was the grave of a 16 year-old - it was very significant to us, as he was close to our age, and it really made me realise how young some of the soldiers were and how traumatic the war would have been for them.

Overall, this trip taught the year group even more about the First World War, which, considering we’ve been taught about it for most of the year, is a big achievement. It also brought the poems we studied in English to life. The whole tour was managed in a really great way as well. We all had so much fun!