Plastic pollution crisis - is it too late? 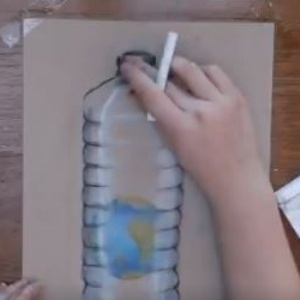 The plastic pollution crisis was thrust into the conciousness of many thanks to the shocking images in the BBC documentary 'Blue Planet II'. Year 9 student Lily created a video with the aim of engaging other young people in this issue, and has so far attracted over 150,000 views and nearly 2,500 shares! Read Lily's thoughts on the plastic crisis, what inspired her to make the video and what we can all do to help.

About six months ago I was feeling anxious about the plastics pollution crisis, and I was finding it hard to communicate these worries to people my own age.

I reached the conclusion that a video would be the best way to spread the message within my age group; videos are such a powerful and fast-spreading medium online, and young people definitely access Twitter. My thoughts on this were really developed and helped by a Webinar group chat that the AFC ambassadors and leaders held about spreading awareness and effective video making. 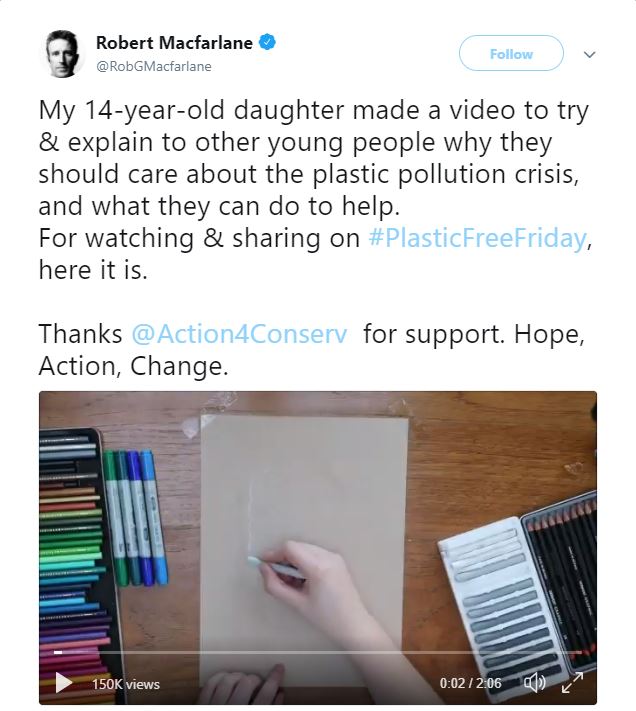 I then drew up a script for the voiceover, making sure to make it concise but also appealing to people’s hearts and minds. I did a practice charcoal drawing of the water bottle image, which I had first drawn digitally several months ago, and then on Boxing Day I filmed it. My grandfather had to stand on the kitchen table to arrange the tripod, and I had to practice not getting my head in the shot, but eventually we got started filming and I drew the bottle - that was definitely a stressful 15 minutes! We had a brief scare when we thought we’d lost all of the footage - yet another a stressful 15 minutes - but the file was found and edited and finally I recorded the voiceover and devised a soundtrack.

The video was completed.

Plastic pollution is happening so fast, and directly because of us and our usage of it. A million plastic bottles are bought every minute, but ninety percent of all plastic is not recycled. That enormous amount of permanent, indestructible material is broken down into microplastic particles in the ocean, and then goes back into our food chains and our bodies. We are only now just realising what plastic does to us, when there is so much of it in our ecosystem and water, it might be too late. The effect on marine life in particular is devastating, but at a more everyday level the beaches we all love to visit are becoming tips for plastic waste brought in by the sea.

I read online about an opportunity to attend the Action for Conservation summer camp in Wales and I knew it was something that I wanted to get involved with - an amazing educational activity with other conservationists my age in a beautiful location. However, I was a little apprehensive about applying, as being thrown together to a distant accommodation block with people I had never met for five intense days is of course going to be daunting! I was also nervous that I would be expected to be much more knowledgeable and active about conservation than I was. My worries were unfounded though, as everyone was incredibly friendly and fun, and there were no enormous expectations on us to be able to list conservation facts or name endangered species - the only requirement was that we should have open minds and be eager to help the environment in some way, be it big or small. The camp was one of the best experiences of my life and the subsequent ambassador program for the rest of the year, encouraged through meet-ups, action plans and badges has given me so many opportunities and spurred me on to create my video on plastics! If any other students are interested in finding out more, the AFC website is http://www.actionforconservation.org .

The one thing I’d like other teenagers to know is that they can make a difference.

The big problem is not all plastic - plastic is a wonderful material that has helped so many and makes our lives so much easier - but in our single usage of plastic items, and plastic overproduction. Each of us needs to make change in our own lives, and we also need to fight for change in our institutions: our schools, our supermarkets, our government. For instance, SPF still disposes of thousands of single use plastic cups each week. I think the school needs to carry out a full plastic audit and I would be keen to help to make this happen.

I know efforts are being made and change is difficult but change needs to happen.

Thanks to Lily for such insightful commentary and for inspiring us all to make change, however small, in our daily lives. Watch this space!