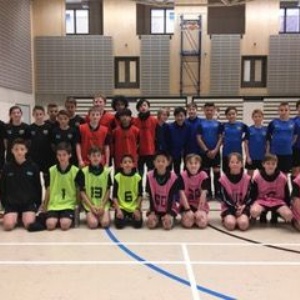 Our Senior School boys competed in an international five-a-side tournament in their new sports hall.

On Thursday 26 April, the Stephen Perse Senior School hosted a boys' five-a-side tournament. We entered four Y7 teams and played hosts to F.C. Port Vendres from France, who entered two teams. The boys were excited to play a round robin tournament with all teams playing each other once on a league basis.  Port Vendres (PV) B team and SPF B team were unbeaten after the group stages of the games and then progressed to the final, with PV A team finishing third and SPF A team finishing fourth after the league stages.The following games were closely contested, and ended with SPF A team fin​​ishing third overall, beating the PV A team 2-1 in the play-off game. The win was crucial as our SPF A team had lost to Port Vendres A team 1-0 in the earlier stages of the round robin. Ultimately, the two finalists were the two B teams from Port Vendres and SPF.

They had played each other previously in the round robin tournament, producing a thrilling 1-1 draw in their group match - a game which was end to end and one that both teams could have won! Chances were missed on both sides, with some good goal-keeping keeping the scores down.The final itself was only seven minutes long, and the match was extremely tense. The SPF B team had Alex in goal, Felix and Alex as defenders, with Leo and Paolo in attack. PV B hit the post on two occasions with SPF B also creating enough goal opportunities to have won the game if they'd managed to follow through. However, when the whistle was finally blown, PV B team had scored the only goal of the game and remained the only unbeaten team in the tournament.

Credit must go to both our Y7 boys and to our Port Vendres guests for playing the game in such good spirit, and staying competitive until the end!