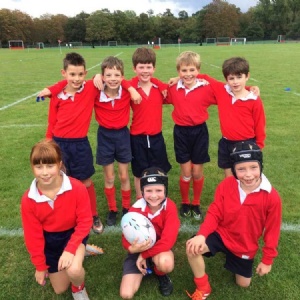 The U9 A team contested a closely fought match against St John's right up until the final whistle. After a slow start to the game, St John's opened up a two try advantage which ultimately proved too much for Dame B's to claw back. A much improved performance as the game progressed, ensured Dame B's matched the hosts in all aspects of the game and tries were scored by both teams.

In their very first contact rugby fixture, Dame B's produced an excellent performance turning around a two try deficit at half time into a tied game by full time.

Initially Dame B's thought that tackling was not important but this proved to be a mistake as St John's scored three tries without reply.

As well as improving their tackling and handling skills, Dame B's proved a match for the opposition and Dame B's outscored their opponents six tries to four. This improvement was due to some terrific tackling from Danny S, Luca W and especially Luca W.

MoM - Luca W for scoring two tries but also for his tremendous work rate in defence.